Alaurentia is a micronation founded on the 9 July 2017, and based on the North American Craton (also called "Laurentia"). It exists as a community of people that share three main goals - ecological preservation, resolution of social issues, and self-sufficiency. Though the majority of the community is located on the Laurentia bioregion, Alaurentia accepts members from all around the world. On the end of February 2020, Alaurentia went through a rebranding and became the Sovereign State of Kebec.

Alaurentia was named after the Laurentia geological feature. The Laurentia bioregion is one of the oldest continental structures on Earth and has existed for over 400 million years.[1] Alaurentia aims to honour its history and protect the diversity of life that has been passed down the eons. "Alaurentia" is explained to be a contraction of "Alliance of Laurentia".

The idea for the micronational movement was first proposed on the 9th of July, 2017. It was founded by a breakaway group of people that were, at the time, rebelling from another micronation. Having learned from the other micronation's mistakes, and having gained considerable experience, this group of friends laid out the foundation for a new, better micronational movement - Alaurentia. This micronation however remained very private, and for over a year it avoided exposure. Its leader, Taninim Long, gave it an official forum on the 3rd of February, 2019. As a result, Alaurentia's population began growing. Within a few months after the creation of the official forum, Alaurentia implemented its own currency, the Aambre; its people submitted and voted upon a Constitution; and then it joined the Arundel Convention.

In August, 2019, Alaurentia triggered the August Uprising, during which several micronations simultaneously stood up against another "nation" that was attempting to dissolve them. As a result of the uprising Alaurentia and several micronation formed the League of Independent Nations, of which Alaurentia became an important voice, promoting the freedom and independence of fellow micronations.

On the 18th of September 2019, Taninim Long was elected President, as the result of Alaurentia's first Democratic Election period. He was elected with overwhelming majority.

On the beginning of 2020, Alaurentia began outreaching to other emerging nations in the Canada area, such as Wexit Alberta, the Empire of Kaemira, and the Nexan Republic.

Alaurentia's government is democratic in nature. The Constitution decrees four governmental branches: the President, the twelve Ministries, the State Governors, and the House of Representatives. The Ministries advise the President, and help managing the nation. The President implements motions proposed by any Alaurentians, and has the right to propose motions. The State Governors are allowed to lead their own Alaurentian States with dedicated rules, as long as these rules respect the Constitution. And, finally, the House of Representatives represents the citizens, and observes all of the rest of the government, so to ensure rights and the constitution are respected by all.

The House of Representatives includes:

For the first two years, Taninim Long has assumed the role of the leader, until the first, proper Presidential election - at the end of which he was formally elected President until 2024.

The government of Alaurentia has been known to be rather neutral overall, sometimes criticising Canada (such as about the carbon tax, which Alaurentia feared would actually encourage Canada to deal with more polluting corporations so to gain more taxes income),[2] sometimes siding with it (such as about Quebec's Bill 21, which Alaurentia declared was a violation of freedom of expression[3]). Alaurentia however seems to be strongly opposing China-Russia current governments, as can be seen in a 2019 statement from Taninim Long.[4] Alaurentia was elected Chairman of the Council for Intermicronational Freedom Enforcement;[5] this is due to the fact that Alaurentia values alliances over growth. In other words, instead of attempting to absorb fellow micronations, which is the growth strategy of many micronations, Alaurentia prefers to enforce the freedom and independence of fellow micronations. This, in turn, increases Alaurentia's allies, recognition and support.

Alaurentia is a strongly innovative community. New scientific theories and discoveries have already been made by Alaurentians, such as a new preon theory, and the proposal of dark matter particles[6] - a proposal that was then supported by the discovery of matching gravitational signatures in black hole accretion disks signals. The community is also actively seeking to improve the environment, to protect the forest from deforestation, to protect endangered wildlife, and to find ways humans and Nature can cohabitate. The very Constitution itself illustrates the nature of Alaurentia's ideals:[7]

Unlike many other micronations, Alaurentia does not force members to pay a citizenship fee. Alaurentia does not force citizens to donate any money, nor to fund any Alaurentian projects, nor does it request its citizens to pay any taxes to the Alaurentian government. This is due to the Constitution of Alaurentia, Article 6, paragraph 3:l, which states that Alaurentian citizens have the right of Treasury: "Citizens have the right to earn money, in any manner they wish, provided such manner does not violate other's rights or the Constitution. The Government may not force citizens into giving away money they earned. This implies that taxes are unconstitutional in Alaurentia."

Alaurentia has its own award, the Alaurentian Achievement Recognition Award.[8] These are directly granted by the President, at his/her full discretion. Alaurentia may not grant more than three awards per year. Members are discouraged from making campaigns with the purpose of gaining nomination for the award. The award is associated with a grant of 100 Aambres, the community's virtual currency. The award face features an unicorn, to symbolise chivalry, rarity, and determination.

Alaurentia is attempting to sustain good relations with other micronations. In fact, it has hosted the Micronational Diplomatic Table,[9] a round table where leaders and representatives of micronations all across the world can discuss and form new relations.

Similarly, all of the micronational communities listed above recognise Alaurentia as an independent nation.

The northern part of the Canadian Shield, where Alaurentia was founded.

Although many citizens of Alaurentia might not inhabit the Laurentia continent, this continent nonetheless hosts the current majority of the members. It is, as a whole, highly variable in climate and geography. The South and the West of Laurentia is relatively flat and sedimentary, with a continental climate. Whereas the East is much milder in weather, and has more mountains. The North is rather cold, and is mainly composed of mountains that have been created by ancient volcanic eruptions during the formation of the continent, and then shaped by ice ages and meteoritic impacts.

Alaurentia has provided territorial claims only for the sake of the Montevideo Convention, in the past.[11] Such claims would be very uncertain, with five possibilities. The capital city was proposed to be located on the Akpatok Island, far from Canada's own current capital city, so avoid interference with Canada's affairs.

However, Alaurentia exists as a bioregional movement, similarly to Cascadia. Therefore, it define its physical boundaries as the Laurentia bioregion, and carefully avoids any overlap with the Cascadia bioregion.

Because Alaurentia is a bioregionalist movement, actual territorial claims have taken the form of Alaurentian States.[12] Members that own an area may claim this area to become an Alaurentian State. These members become Governors of their own States within Alaurentia; they may name their States in any manner they wish; they can even form their own rules, as long as they respect the Constitution of Alaurentia.

The State of Koch Island, led by Governor Andrew, represents the first State of Alaurentia.[13] It is located within the Arctic Circle. 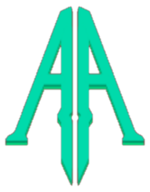 Alaurentia has its own virtual currency, the Aambre (pronounced "Amber").[14] There have been exactly one million Aambres issued, and these are exchanged by the members using the official marketplace. Aambre is a fiat currency, and has no official value. However members have agreed to assign it a value of roughly 0.01 A = 1 USD (July 2019 value of USD).

Higher values, based on past claim that one Aambre has the value of 1/21th of a Bitcoin (since there are 21 million Bitcoins), were opposed by the President, on the basis that 0.01 Aambre should have a value low enough that members could buy items normally sold for 1 USD (July 2019 value of USD).

At first called Alaurentian Coin, then AlliCoin, then Aamerald, the currency was renamed "Aambre" so to shorten its name and spelling.

The community of Alaurentia is highly centered on ecological awareness, conservation of the biosphere, green energy, but also the preservation of ancient skills, traditions, and cultures. It encourages scientific and technological advancements, especially those that are in harmony with the earth and wisdom that was passed down to the community as a species. Education is promoted between members; any member that is skilled in one thing may teach this skill to any other member. The official language is English, but French is also often spoken locally, and members are encouraged to preserve their ancestral languages, some of which are facing extinction.

A subculture of draconity has taken root within Alaurentia, with a considerable fraction of the population relating to such a movement (2019). This might be an effect of the first President, who was often referred to as the "Dragon of Alaurentia".