From MicroWiki, the micronational encyclopædia
(Redirected from Zealandian Workers' Party)
Jump to navigation Jump to search

The Zealandian Worker's Party (Swedish: Zeelandienskt Arbetarpartiet, Zealandian: Zålandieni Arebiter Flokkurrinn), also known as the ZWP, is a Far-Left political party that operated in Zealandia until it was banned. It was the largest party in the Zealandian National Peoples' Assembly, gaining 22% of the votes in the most recent election prior to the February Statskupp.

In its first incarnation it gained a small amount of representation within the Zealandian Parliament and was the minor partner in a coalition with the SDPZ. When the party's establishment was announced, on Skype, The Rt. Hon Daniel Anderson claimed that it left 'the country crawling with reds', but these claims were refuted as it was evident that Zealandia is a multi-party democracy with only one leftist party prior to the ZWP's establishment. The Party was led by Alex Ulbricht, Admiral of the Zealandian Navy at that time, until he exited Zealandian politics. The ZWP was forcibly amalgamated with the SDPZ within a few months.

The Party was, however, re-established in November 2012 by Ulbricht. The party's revival came just short of a year after the amalgamation with the SDPZ, and also in enough time to partake in legislative elections.

After the February Statskupp, the Electoral Authorities banned the party from working openly within the Zealandian political system, a disregarding of the principles of democracy. The ZWP continues to operate from within the USLSSR, calling for a return to Republicanism and the re establishment of democracy.

The ZWP views itself as a broad Left Wing party, and always has done so. It sees the use of democracy as a key tenant of the Socialist society it offers as its vision for Zealandia's future, in direct opposition to the tyrannical rule of the 'on again off again' monarch. Internationalism is also a key part of the policy outlined by the party, it plans to begin the process of bringing together an intermicronational movement of other Parties of the Left. 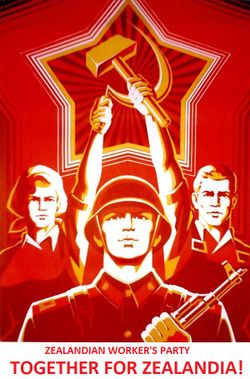