The Royal Tarvitian Air Force (RTAF) is the Aerial Warfare branch of the Tarvitian Armed Forces. Comprising of three air-faring squadrons, the Air Force is the most developed and most active branch of the Tarvitian Military. With it's ties to the British RAF Air Cadets youth organisation, the Kingdom of Tarvit benefits from a large variety of available Radio Controlled aircraft. The Royal Tarvitian Air Force owns four of the fixed-wing aircraft on its own and has access to a further fifteen aircraft. The RTAF holds the Kingdom of Tarvit's flag-carrying duties, No. 43 Squadron being given the duty to carry out on behalf of the monarch.

Starting it's life as the Royal Neuki Air Force, the RTAF formed as a single squadron, No. 1 (General Purpose) Squadron took on all duties of the Air Force. The first aircraft, a Seagull Boomerang T1 was delivered on the 28th of February and was piloted by both Civilian Instructor Don Imrey and Keenan Carr I in the purpose of further training the Rex to fly solo. Upon his first solo, the Rex officially took command of 1 (GP) Squadron and conducted self-training whilst also training members of the Royal Air Force Air Cadets in Glenrothes and at RAF Kirknewton. Upon (then) Flying Officer Keenan Carr completing his SAA bronze, the Kingdom of Tarvit commenced flying operations.

Upon the disbandment of No. 1 (Multi Purpose) Squadron, the units that splintered from the former mega-squadron were re-purposed as a specialised training and specialised bomber/aggressor squadron. No. 12 (R) Squadron stood up as a Training unit, offering the Neuki Air Force a specialised squadron for the training of pilots with assigned equipment that negated having to transport assets between squadrons which had become a logistical nightmare. The re-purposing of units allowed for a significant boost in efficiency.

The first RTAF Station to stand up, RTAF Glenrothes is the home to both No. 43 and No. 56 Squadrons with No. 43 Squadron set to move to RTAF Odinsden in July. A grass field featuring a 100m runway, it is utilised by both the RTAFand the local Aeromodellers Club during the weekends with the RTAF being restricted to non-combat exercises only due to SAA regulations as per CAP 658. 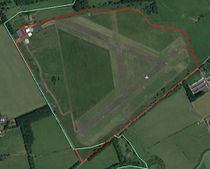 The largest of the two RTAF Stations, RTAF Odinsden is home to 12 (Reserve) Squadron and is the primary training base for Tarvitian pilots. Also known as Royal Air Force Kirknewton the base is shared by both the RTAF and 661 Volunteer Gliding Squadron of the Royal Air Force. Both operate solely on weekends and share close relations, communicating regularly to deconflict operations with priority being given to the Gliding Squadron.

RTAF Odinsden is the only RTAF Base on Tarvitian territory. Situated in the Yeoman Territory of Odinsden, it serves as the Headquarters for the Royal Tarvitian Air Force. Group Captain Carr stated on August 26th 2019 that he intends to begin the withdrawal of Tarvitian Assets from the station, prompting Lachlan MacGillvary to consider a complete withdrawal of Odinsden as a territory. An incident on the 25th of August involving the stations RTAF Commander leading to disciplinary action from the Station Commander (OC 661 Sqn Ldr Dan Lewis) has prompted the decision.

The RTAF utilises a small hangar space in the MT Hangar of RAF Kirknewton to store it's aircraft and teach theory to it's pilots. The hangar has capacity for a number of RC Aircraft and houses aircraft in their disassembled configuration. 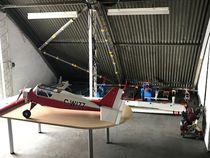 As the RC flying ground for the Dundee East area of the SAA, The RTAF has often used the site as a site to train pilots on the SD Greenley aircraft and other large models. The site is ideally located for space as it is on the domestic site of MoDBarry Buddon which is an expansive military training area used by the British Armed Forces for a whole manner of training operations and even features a grass runway capable of handling the Royal Air Force C-130J Hercules.

After Grp. Cpt. Carr's announcement of the Tarvitian withdrawal from RTAF Odinsden Portmoak Airfield was deemed most likely to take on a new role that was then being carried out under the Royal Air Force's 661 Volunteer Gliding Squadron. A move away from Odinsden meant an end to using direct of the Royal Air Force's facilities that allowed some Tarvitian citizens to carry out flying training through gliding with the Air Cadets. The move to Bishop Hill meant that Tarvitian Citizens weren't limited to the inconsistent schedule of RAF Kirknewton, opting for a more personalised and flexible training syllabus.

Motto: "Quid si coelum ruat" (Latin for: What if the Heavens Fall?)

No. 12 Squadron covers all aspects of the RTAF's practical flying training. The squadron operates out of both RTAF Glenrothes and RTAF Odinsden with regular deployments to Barry Buddon in an expanded outreach program. The squadron features all aspects of training from ground handling; to elementary flying training; to specialised advanced training. As of July 2019, No. 6 (Reserve) Squadron will stand up and take the role of advanced training on large models - removing the SD Greenley T2 from No. 12 Squadron.

12 Squadron follows the Scottish Aeromodellers Association's training syllabus to train it's pilots in basic airmanship. To fly fixed-wing aircraft for the Tarvitian Air Force operationally, a Bronze+ Award must be completed to show that independent flying is an option. Testing is done at both RTAF Glenrothes and RTAF Odinsden with large model tests being conducted primarily at RTAF Odinsden or Barry Buddon Ranges RFG. 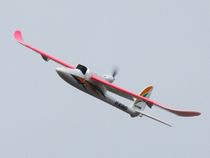 Motto: "In futurum videre" (Latin for 'To see into the future')

No. 56 (AC) Squadron is the most active frontline squadron in the RTAF. Serving as the areal unit attached to 17 Regiment Royal Corps of Observation, 56 Squadron operates drones with high definition cameras in the role of reconnaissance. The only squadron that features both rotary aircraft and fixed-wing together, 56 Squadron is the sole operator of the Kingdom's quadcopter drones. The squadron's base at RTAF Glenrothes allows it to practice operating in built-up areas and observe targets in towns.

The soaring reconnaissance drone, the Bixler MQ2 is the main aircraft used by the squadron. It is confirmed that the aircraft has been used on operations, of which all are classified. Intelligence gathering serves as the main operational advantage the Bixler MQ2 offers as well as the capability to be fitted with equipment to aid in the detection of any potentially hostile drones. Bixlers are often used to observe local training exercises conducted by micronations in the central belt of Scotland. Their long loiter time allowed by the LiPo batteries retrofitted to the aircraft allows for extended periods of reconnaissance, often being deployed in pairs so as to ensure one aircraft is always in the air. The aircraft isn't limited to runway operations and is able to be launched over the shoulder, allowing 56 Squadron to operate from any location a quadcopter can as it is not limited to needing a large area to fly from.

No. 1 (Royal) Squadron is a non-operational squadron that, in it's current state, consists of one Cessna 172 RC aircraft. The squadron is manned exclusively by the Monarchy in the purpose of hobby flying. Plans for an inventory of 3 aircraft were set out at the beginning of March 2019 with one of the new additions having been delivered on the 10th in need of extensive repairs and the second planned addition being in storage in Kinross, Scotland. The stand-up occasion was announced as 1600hrsGMT on March 15 to mark the birthday of the former Rex. Keenan Carr I. 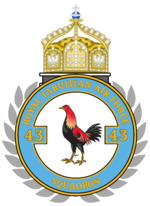 Motto: "Gloria Finis" (Latin for: Glory is the End)

As the flag-carrying unit of the Tarvitian Armed Forces, ceremonial duties for the Kingdom of Tarvit fell to No. 43 Squadron "The Fighting Cocks". These duties include representing the Kingdom at any micronational events or summits. Founding Rex. Keenan Carr transferred the Royal coat of arms and Royal standard to the squadron upon its formation as the Training squadron for the Royal Neuki Air Force in April 2018 and through the transition to Tarvitian Air Force, the squadron retained the standard.

43 Squadron takes it's mascot, motto and insignia from No. 43 Squadron Royal Air Force. Being the favourite squadron of the former Rex, such a fondness towards the squadron led him to directly order the creation of No. 43 Squadron RTAF in it's honour. No. 43 Squadron RAF was disbanded in July 2009 and the disbandment's 10 year anniversary was marked by a circuit of honour at RTAF Glenrothes performed by an A29 Falcon of 43 Squadron RTAF. The date is a national holiday in the form of "Glory Day", as a direct reference to the squadron's motto "Glory is the End". 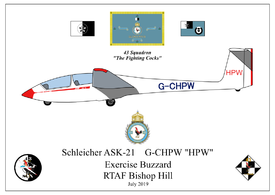 No. 43 Squadron has never engaged in combat operations and mainly acted as an aggressor unit on exercise with the Tarvitian Army and allied nations. It transitioned from the role of advanced training to attack in February 2019 upon the merge of the Kingdom of Neuk and the Tarvit Republic as it was transferred from the Neuki Air Force to the RTAF. Although having never served it's intended purpose, massive successes in Tarvitian tactical advancements and capability have been enabled by having the squadron as an asset.

In July 2019, the squadron moved from RTAF Glenrothes to RTAF Odinsden to take on the role of advanced training and operations of the A29 Falcon in a more suited environment. This duty was short lived, disbanding on Saturday 25th of August 2019 upon Grp. Cpt. Carr announcing the withdrawal of the RTAF from Odinsden. 236 OCU Detached flight, serving under No. 43 Squadron was formed in July to begin the moving process to RTAF Bishop Hill. 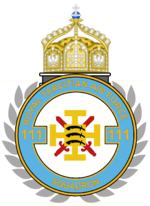 Formed in September 2019, No. 111 Squadron formed at RTAF Barry Buddon upon the disbandment of No. 236 OCU with the RH A29 Falcon in the role of Ground Attack Reconnaisance.

Another squadron, like No. 43 Squadron based on a Royal Air Force squadron that disbanded (No. 111 Squadron RAF is given special duties that include providing the RTAF with it's PR and outreach teams to recruit new members of the Tarvitian Armed Forces.

Upon the opening of RTAF Barry Buddon, it was announced that No. 6 (R) Squadron would stand up with it's headquarters at the base and a permanent presence at all RTAF Bases. Taking the Large Model Association duties from No. 12 Squadron, 6 Squadron will fly the SD Greenley and other RC aircraft deemed to be "Large Models" > 12 kg, taking the duty from the overburdened 12 Squadron.

In November 2018, then a part of the Royal Neuki Air Force, GL1203 - a 12 (R) Squadron SD Greenley - crashed short of the main runway at the Barry Buddon Ranges model airfield. Conditions were windy with gusts up to 23 knots and mid-altitude overcast cloud. A technical fault with the aircraft was identified upon takeoff as the aircraft struggled to rotate by the boundary fence of the field. The flight previous, the landing was made difficult by the starboard main wheel dislodging from the aircraft.

Having failed to find a solution to the problem, control of the aircraft was given to an experienced SAA airman who had landed the previous flight. Controls became sluggish on base leg and the aircraft stalled and nose-dived into a cattle field five metres short of the boundary fence. The nose of the aircraft was damaged and the servos lost in the grass. The problem wasGL1203 was repaired two months later and flew again at RTAF Odinsden.