From MicroWiki, the micronational encyclopædia
(Redirected from New Scythia)
Jump to navigation Jump to search

The Federation of New Scythia, more commonly known as New Scythia, is a micronation located in several states in the United States, created by H.M Justinian I after the failure of Borgsland.

According to Justinian I, the goal of New Scythia is for it to develop an authentic culture so that it can fulfil its potential to become a macronation.[1] [a].

Justinian I came up with the name New Scythia in order to refer to a new version of the Scythian (/ˈsɪθiən, ˈsɪð-/; from Greek Σκύθης, Σκύθοι) or Indo-European worldview suited for the modern world. He chose the name New Scythia because it is his personal wish to see his micronation aspire to develop towards that mentality. This was partially the reason as to why he founded the Royal Ásatrú Padoru Party. 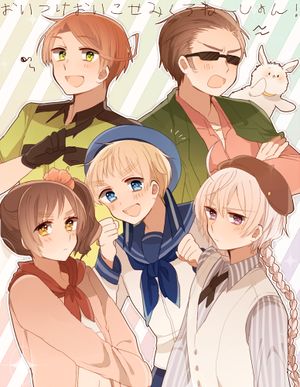 Justin Borg first heard about micronations in mid-2015 through the anime Hetalia: Axis Powers. The anime featured moe anthropomorphisations of various prominent micronations such as the Principality of Sealand and the Republic of Molossia. He remained disinterested in the idea of micronationalism for a while afterwards, in part because, in his view, the average Hetalia episode was so short and vague, that to him they only provided a source of lighthearted comedic entertainment rather than an in-depth form of satire.

Justin first seriously became interested in mid-2018 and early 2019 when he discovered Vice News's coverage of MicroCon 2017. This interest became further accelerated after discovering MicroWiki. Eventually, he decided to eventually start his own micronation. The future King had an avid interest in global monarchies at the time, having met monarchists online and infrequently engaging in different monarchist groups on DeviantArt. It was because of this interest that Justin initially decided to make Borgsland a monarchy. Justin also retained a strong interest in heraldry (particularly its rules of marshaling and cadency) and vexillology at the time, and as such much of the conceptualization of Borgsland was artistic rather than purely practical.

Borgsland was founded on 24 January 2019 during the longest government shutdown in American history via a Declaration of Independence sent to Wisconsin congressmen Glenn Grothman, where Justin started the succession of his bedroom and backyard from the United States, giving himself the title of "Justinian, King of the Borgslandics". The declaration saw no response from the governments of the U.S or Wisconsin.

Within months of its foundation, Borgsland became inactive because of Justinian I's lack of interest in mobilizing its citizens to help build the micronation. He also had an issue recruiting new citizens from his high school, due to his introverted personality and the general lack of interest in micronations the different students had when approached on the topic, these exchanges generally discouraged the King. Furthermore, almost all citizens of Borgsland were family members (the only non-family member being the King's father's best friend), many of them rarely used the internet but were nonetheless interested in contributing to Borgsland.

By the time the COVID-19 pandemic had made a full sweep of the United States in 2020, and the King had been out of school for several months. During the middle of his summer break, suffering from extreme boredom due to months of isolation, the King had attempted to ounce again re-form Borgsland, but this time, he retextured a 3D model in an PMX Editor and exported it in VRM format through Unity plugins, in an attempt to run Borgsland entirely from the Internet as a Virtual YouTuber (or VTuber), who would stream various PC games. Unfortunately, though, his carrier as a VTuber was short-lived due to severe hardware restraints on his computer. During this time Justinian I met Yuma Yamano, who would later go on to become very prominent within the American VTuber Community.

New Scythia was founded on 28 August 2020, as a continuation of Borgsland (through nullifying all of Borgsland's previous royal decrees, except for those regarding the Order of the Chequered Mound). At this point, the King had recognized that he had made many mistakes and had decided to "redo" his micronationalist career with real commitment. The first thing he did was create a Discord server and, once it was finished being prepared, advertised it widely on the MicroWiki Discord. And soon, he was able to double the number of citizens he originally had from Borgsland. New Scythia's constitution was signed on the same day as New Scythia's foundation. The constitution was written to be intentionally short, in order to allow the most room for political simulationism and culture-building among the New Scythian people. In this way, it is though that New Scythia will most efficiently achieve its goal of creating a unique micronational culture.

Until the 20th of February Justinian I has been on Hiatus form New Scythia. Returning he intends to make a statement about the future of New Scythia and the direction of its policy within the end of February of 2021.

New Scythia is a federal absolute monarchy, with the King acting both as head of state and head of government. The federation is divided into different duchies that reign with relative independence, so long as they pledge fidelity to the King. All government positions are appointed and dismissed by the King, and the duties of everyday governance are divided into four ministries (the Ministry of Defence, Culture, Foreign Affairs, and Commerce). New Scythia's Legislative body is called the Alþingi, and is run by different Senators, appointed by members of the peerage (known in New Scythia as patricians), who are in turn appointed by the King. The Alþingi meets weekly each Saturday at 5:00 PM US CT to discuss the ongoing of New Scythia and any proposed legislature, laws are by the majority vote of senators ounce a legislative motion is carried. 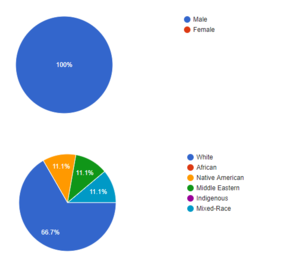 A chart Depicting New Scythian Demographics as of September 6th 2020

Aliens apply for New Scythia Citizenship via Google Forum managed by the King. Currently, people from all around the world are allowed to become New Scythains, however, nearly all of the new Scythian Citizens are residents of the United States or the United Kingdom, with only a small handful of citizens living in other places in Europe such as Spain or Serbia. New Scythia is a majority White and currently a completely male micronation.

Since the foundation of New Scythia, Justinian I has engaged in informal Diplomacy with and several micronational leaders over Discord. The King has also developed a friendly relationship with Dhrubajyoti Roy, Jonas Rhymer, and Thomas I over different topics both related and unrelated to micronationalism.

As of 12 September 2020, New Scythia adopted a special criteria via royal decree for recognizing and perusing diplomatic relationships with other micronations:

1. The nation must have had a history and presence in the micronational community and the physical world spanning over a single year

2. The nation must have a population of over 5 citizens, Egostani nations are unrecognized by New Scythia

3. The nation must claim territory in the physical world that can be visited, not solely in Antarctica or an online domain name

4. The nation must not have membership status in any YAMOs (ie; inactive intermicronational organizations that only have a presence online)

6. The Nation must not be satirical, but have a serious purpose for existing and goals to fulfil

7. The Nations Head of State must be over the age of 15 years

The only armed conflict New Scythia has thus far been associated with is the Edenian-Cat War, where, brooms were used against cat rebels in Eden. The conflict was a controversial topic between Harold, Duke of Eden, and Minister of Foreign affairs, Thomas I between the Simulationist and Sucsessionist viewpoints (with Harold, advocating his simulationist point of view, whale Thomas I advocated for a Susessionist view).

Like many micronations, New Scythia is a landlocked micronation located in Cedarburg, Wisconsin and Evansville, Pennsylvania. Both areas have a relatively similar climate year-round, with humid Summers and cool Winters that usually have snowfall.

New Scythia holds movie nights every Sunday at 7:00 PM (19:00) Central Time on its Discord server, The nations only press company is one privately owned by The King, the New Scythian Herald, were the king wrights about current events in New Scythia and a weekly report each Sunday (or on occasion the following Monday if he is busy) about what has happened during that particular week in New Scythia.

both Justinain I, his mother, and most of his maternal family are avid practitioners of the visual arts, with Justinian designing all of New Scythia's National Symbols and preferring to use the digital medium of GIMP 2 and sketching. The subject of many, if not all of Justinian's work is heraldic and graphic. King Justinian's mother, maternal grandmother, and maternal Great Aunt, are avid painters.