Libertalia, officially the Socialist Republic of Libertalia, is an unrecognized state which was formed from three micronations after the dissolution of the USSA.

Libertalia was founded on February 5, 2019 on the principles of socialism and liberty.

The name Libertalia comes from a purported pirate colony founded in the late 17th century in Madagascar. These pirates were anti-capitalist, and managed their colony with a democratic political system and a socialist economic system.

Other names in use

On February 5, 2019, the nations of Burlington, Highland, and Valmore dissolved the USSA to establish a singular micronation. Citizens living outside of state land are designated as "citizens abroad". They are afforded all rights guaranteed by the state.

Libertalia is a unitary Marxist-Leninist one-party socialist republic. The Chairman of the State Affairs Commission is elected by the Communist Party.

The federation is divided into three types of administration:

The Constitution of Libertalia was implemented on February 13, 2019. More information is listed here. 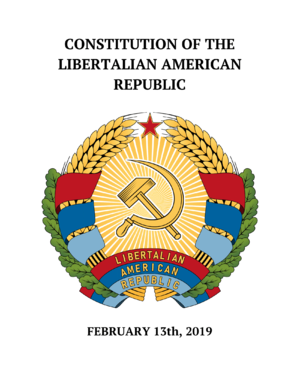 The economic system of Libertalia is a planned economy. The economy mainly revolves around agriculture, but also provides services for citizens of the United States.