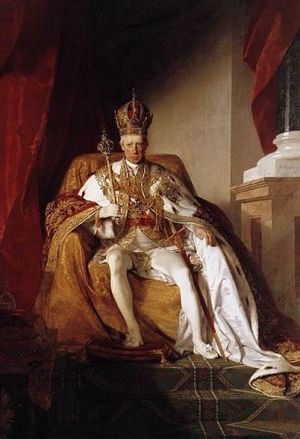 Kaiser Franz I, founder of the Austrian Empire

Kaiser is a monarchical title, originating from the German translation of Emperor and (like Tsar) deriving from the Roman title "Caesar". Kaiser is most often translated as "Emperor", but can also be translated as "Caesar", a title which ranks slightly below the aforementioned.

The joint monarchs of Ctoria and the Zweites Vilasianisches Reich used the title Kaiser - the style "Kaiser of Ctoria" and "Kaiser of Vilasia" is still held in pretense by Declan I, II & V. Caesars of the Empire of Austenasia, such as Crown Prince Jonathan and King Calum I on Vilasia in other hand it's held by Kaiser Vince of Vilasia, have sometimes had that title translated as "Kaiser", and the monarch of New Europe and Vilasia is often referred to by said title. The Micrasian entity of Shireroth also uses the title Kaiser for its leaders.