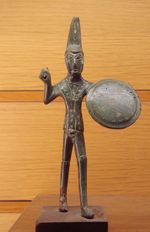 An Etruscan statue of a warrior.

The Principality of Andany is located on the Italian island of Sardinia, which embodies a lot of history. Much of the island’s arable land is devoted to cereal cultivation and fruit growing. Macchia - grasslands mingled with a scrub of cistus, lentisk, myrtle, prickly pear, and dwarf oaks—covers most of the uncultivated countryside. A rich salt-loving vegetation is found along the shores and cliffs, and salty marshes extend along the coast. Most of the mammals are like those found in Italy, but some of those deserving special mention are a Sardinian weasel, a native wild cat, the mouflon (a wild sheep found only in Sardinia, Corsica, and Cyprus), and the Cape hare. The dominating feature of the island (some 7,000 examples of which are said to exist) is the nuraghi: truncated conic structures of huge blocks of basalt taken from extinct volcanoes, built in prehistoric times without any bonding. Most nuraghi are quite small, but a few are obviously fortresses. There is also a nuraghic village near Dorgali with traces of about 80 buildings identified. Expert opinion now dates the nuraghi to about 1500 to 400 BCE.

The civilization that built the nuraghi probably had its roots in the prehistoric population of the island, but its origins and affinities are uncertain, and it left no written records. Mant archaeological sites have been fully discovered in Sardinia. Examples include the Torre Di Longosardo, Coddu Vecchiu, and the Nuraghe la Prisgiona. Tt is possible, though that the Sherden, one of the Sea People who fought in Egypt in the 13th and 12th centuries BCE, either came from, or settled in Sardinia, and they gave the island its name. Archaeological evidence from the Nuraghi culture suggests a strongly organized power of tribal states. The working of metal from local mines was presumably the chief source of wealth. However, the presence of Phoenician trade settlements along the Sardinian coasts from the 9th or 8th century BCE must have vigorously contributed to Sardinian prosperity. In the centuries that followed, Sardinia often fell prey to passing pirates and marauders, owing to its strategic position in the middle of the Mediterranean sea.  It is no wonder therefore that most of the main Sardinian cities are inland, wary as Sardinians were of the dangers that came from the sea. These raids in fact continued right up to recent times, as some of the older folk used to describe. On the Costa Smeralda, for example, the natural caves at Liscia di Vacca were used as hiding places from the pirates by the Orecchioni family, just at the turn of the century. The highest local peak, Monte Moro, is so called because it provided a useful look-out against the Moors. Monte Canaglia (Rascal Hill), is the name given to the place where the scoundrels settled down and you can find traces in some local surnames, like Ragnedda,  "wicked like a spider" or in place names, Lu Saraghinu "the Saracen", La Petra di li Tulchi, the rock where the Turks set ashore.

There is still memory in present day families of not too distant events, like the mother who left her child on the beach to play, while she collected berries close by. When she returned, she found the Saracens sailing off with her child and  in grief lost all reason. She became known as "La scasciata d'Agnula Maria", Mad Angle Maria. The Casalloni family that today resides in nearby San Pantaleo, narrowly escaped a bitter fate for their two small children, Stephen and Luke, who fortunately were not in their house but under a nearby olive tree, when it was ravaged by the Moors. In thanksgiving they made a donation to the church of an 18 century flag. It is curious to note a further indication of the natural fear of invaders from the sea, that on the coast, the old Sardinian cottages never have a sea view as they were always built in positions where they couldn't be seen from the sea. Moreover, Sardinians completely lack a fishing tradition and the few fishermen on the island are all migrants, or their descendants, from the Pontine Islands, close to the mainland. It is an ironic quirk of fate, that today the recent economic prosperity of Sardinia has actually come from the sea, from an invasion of many summer tourists. This has also led to many intermarriages, with mainland Italians, Germans, Swiss, English, French, Scandinavian and even with Australians. Andany wouldn't be founded until many years later, when Sardinia colonized immensely and became civilized greatly.

At 8:30 AST on July 25, 2017, Pablo Macias declared independence from Italy as the Principality of Andany. Unanimously, Pablo Macias was crowned as the Prince of Andany shortly after. A Declaration of Independence was sent in paper form and by email to the Italian Government. No response has come back so far. The Prince was on holiday when Andany declared Independence. An Instagram post was made on the founding of Andany. While the Prince was on holiday in Mexico, many people greeted him in Puerto Vallarta and other cities, including his birth city. 95% of the people the Prince met actually thought that Andany was a sovereign nation; in a form, it is. Some said that he was young, but qualified. Only 2% disagrees that he wasn’t qualified, as the entire voting amount was ~500 citizens of the Prince’s birth city. The purpose of the Principality of Andany was to protect the endangered Mediterranean species Queen conch,[1] and the Posidonia oceanica, or Mediterranean seagrass.[2] The Queen conch species is being killed and their habitats have been destroyed by fishermen and boats. The Posidonia oceanica, is known in Italy as "the olive of the sea".[3] The Prince really likes Queen Conch, thus creating the Queen Conch Restorations Act. The Queen conch Restoration Act was signed the day Andany was founded. It consists of it being the current National Animal and having extra care from the Oceanic Conservation Agency. Andany was founded with basic principles based on the Etruscan societal standards. 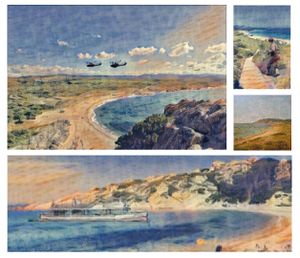 A collection of paintings of the Revolutionary War

The Andanian Revolutionary War was an internal conflict in the Principality of Andany about conserving the Hudson Mountain Range into a nature conservation area. The rebel against the conservation idea was Will van den Boom, a Roman Imperial Party Senator who claimed that making a preserve wouldn't help the flora and fauna. The conflict began on 12 March 2018 after the National Assembly of Andany could not make a resolution towards the conservation area. It ended on 14 March 2018 after a peace agreement was signed in order to maintain Andany as a country and for nature to be preserved in Andanian culture and society. The Prince, his followers, Will van den Boom, and his followers all signed a peace agreement called the "Hudson Agreement". The purpose was to establish recreational parks for the flora and fauna of the Hudson Mountain Range and River Valley. 2 Andanian citizens did remain neutral throughout the entire ordeal. Some propagranda for either side was shown on national television. Following the signing of the Hudson Agreement, the Prince himself visited the nature reserve along with Will van den Boom. They explored and found some of the Painted lady butterflies still in Andany. This inspired the Prince to start the National Conservation Agency. The national organization was created to find, help, and protect Andanian flora and fauna.

On January 3, 2018, the Kingdom of Imvrassia sent an email to the Ministry of Foreign Affairs. They asked if Andany could unite with the Kingdom of Imvrassia or become a single federation. Here is a quote from a part of the message, "The Government of the Kingdom of Imvrassia proposes the union of Andany with Imvrassia or we can create a federation.". For safety reasons, the Prince himself asked, "We don't quite get the cache on a "union" or federation being created.". The citizens of Andany had mixed feelings about the message. The population took a quick vote online, with a staggering 100% voting no. After the Prince sent the message, a response came back on January 5 at 5:53 AST. The response astonished everyone in Andany. It read, "1. The Principality of Andany would made an official request to form a union with the Kingdom of Imvrassia. 2. The Government of Imvrassia will immediately accept this request and Andany will be proclaimed as an Imvrassian Province. 3. His Highness Prince Pablo Macias will be appointed as Governor-General of the Province of Andany. 4. His Highness Prince Pablo Macias will be appointed as Deputy Minister of Foreign Affairs of the Kingdom of Imvrassia. 5. His Highness Prince Pablo Macias will be awarded the title of Count of Imvrassia. 6. The Province of Andany will have the full inner workings of local government and will be allowed the establishment and operation of a representative-public advisory body under the name of the House of Representatives. This body will be under the chairmanship and responsibility of the Governor-General. 7. The Governor-General of the Province will be the Commander of the Provincial Guard of Andany.". The Prince voted later in the day, along with the entire population. Non-surpsrisingly, the Prince and the residents voted no. This was a major part in Andanian history, as a country tried to turn an entire country (micronation) into a province. While the Ministry of Foreign Affairs replied with a polite no, the Principality of Andany did however recognize the Kingdom of Imvrassia.

In the dawn hours of January 31, 2018, Andanian residents woke up to a startling view. Earth’s natural satellite was eclipsed by the Earth itself, causing it to have a red tint. At 7:25 AM AST, Andanian residents, along with the Prince, watched in awe of the lunar eclipse. Then, two bright blue lights hovered 2,000 feet over the Duyatán Peninsula. Shocked citizens watched as the lights danced in harmony. After some time, the lights proceeded to fade into the sky and disappear. The sighting event lasted 20 minutes, with citizens taking pictures. Nearby Italian resident from the city of Rena Majore also reported seeing strange blue lights in the air. Currently, Andany is trying to standardize into its own measuring system and time zone. The time zone of Andany is officially Andanian Standard Time, or AST. The time zone was voted on and adopted on 1 January 2018 as a uniqueness for Andany. A recent unification with the Kingdom of Imvrassia was politely denied by the Ministry of Foreign Affairs. Also, the Andanian Times is creating more efficient articles every day, which was a goal for the national newspaper company in the first place. The lifestyle in Andany is very egalitarian and organized, where even bosses do not discipline or treat their subordinates rudely. As it is a capitalist based country, Andany strives to ensure equality anywhere at any any time. The result of equality in Andany creates high literacy rates at 90%. Andany may not be a socialist country, but the welfare system in the country is very wide ranging, offering support for housing, unemployment, health, child care, and education as well. Therefore, Andany has many of the characteristics of a socialist country, even while remaining officially free market/capitalist. During the 2018 MOF Games, Andany earned a silver in best flag, a bronze in best motto, and a gold in best coat of arms.