Herzetia is made up of numerous provinces and territories. They are listed here.

Herzetia has five provinces under its jurisdiction.

Cordania is Herzetia's most developed province, being the home of the capital city, New Nolius. It has a population of 5, and was established officially on March 8, 2020, though it has effectively always existed as Herzetia's first province.

Kravia was the third province to be established, and is the largest one. It is located in Oregon, in close proximity to Cordania and Umbra, and borders Aldun. The terrain is thick vegetation and forest, with hills and a creek. Kravia was officially established on March 18, 2020. No citizens live in Kravia.

Originally known as Strauff, Aldun was the fourth province to be established, and is slightly smaller in area than its neighbor, Kravia. The terrain consists of steep, rocky hills, with trees and a creek that runs through the province near the bottom of the hill region. Aldun was also officially established on March 18, 2020. No citizens live in Aldun.

Umbra was the fifth province to be established, and is the smallest province. Its name is derived from another word for shadow. It does not border any other provinces, but is close to Kravia, Strauff, and Cordania. The terrain is composed of thick vegetation, with a small pond. The province was officially established on March 18, 2020. No citizens live in Umbra. 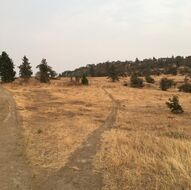 A picture of Sulena's landscape.

Sulena is the largest area of land that Herzetia claims. It is primarily made up of grassy hills, with trails running through. A small fort, known as Fort Cnoc, is in operation on the territory's far Eastern side, and is maintained by members of the military. Fort Cnoc's name is derived from the Gaelic Irish word for hill. Sulena Territory was established on June 13, 2021, and has no permanent population.

Harlaus is located in walking distance from Dorimia province, and is easily accessible. A green bridge runs across the territory, providing easy travel. A creek runs through the territory, as well as a winding road. The territory is frequented by homeless individuals, so it is unsafe during the night, and potentially unsafe when alone during the day. As a result, Harlaus territory is rarely visited except during the day. Harlaus' name comes from the character King Harlaus from the video game Mount and Blade: Warband, one of Prime Minister A.Y's favorite video games. Harlaus has a population of 0.

Some of Herzetia's land claims are 'neutral', or not incorporated into any province or territory, though they are still Herzetian.

Rupert's Bridge is currently Herzetia's only neutral zone, being a land bridge over the creek that flows through Kravia and Aldun. Rupert's Bridge itself is sandwiched between the two provinces, separating them.

There is land, that though formerly claimed by Herzetia, is now unclaimed, or controlled by another nation.

South Yeno was ceded to Herzetia by the United Ocean States on December 15, 2019 as a friendly gesture from the UOS to Herzetia. South Yeno bordered land that belonged to the Great Lawl Reich to the North, and was in close proximity to the UOS mainland. South Yeno was annexed by the Great Lawl Reich on July 31, 2020 as a result of the signing of the Treaty of Yeno. As of now, the former territory has been reincorporated into the Reunited Ocean States following their victory in the Greater Aleunnic War.