Arura Novale is a unitary state, consisting of one singular constituency area: the state itself. The Charter of the state precludes the government from setting up administrative divisions in the nation of any kind, preventing the state from moving towards a system of federalism.

The nation gained independence from the Democratic Union of British States after an executive order from Lord President Horatio Eden removed members of the Union's Territorial Acquisition Commission from the area, pulling them back to halfway across the Lacusian Territory, ceding the other half to the newly formed Arura Novale protectorate. On the 13th of April, 2017, the Protectorate signed a treaty making it a subordinate state to the Desi Empire. 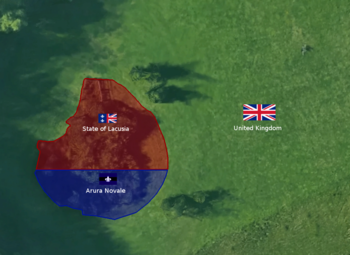 Arura Novale has not been formally measured, but examination suggests the nation to be smaller than the smallest internationally recognised nation, Vatican City.

Arura Novale borders to the north-west the Democratic Union of British States via the DU State of Lacusia. Arura Novale for its part was originally the south-western half of what was then the Lacusian Territory, but was ceded when it requested independence via the Charter.

The area itself is mostly swamplike in nature, with tall fronds coming out of a shallow pond at the base of the pit Arura Novale is situated on. Rabbits are known to frequent the area.