Commonwealth of Nova Veritasia and Her Dependencies

The Commonwealth of Nova Veritasia, officially The Commonwealth of Nova Veritasia and Her Dependencies is a self-proclaimed hobby micronation with territorial claims within the Maritime region of Canada. It is made up of 4 Provinces, and several smaller Exclaves. Its capital city is Fort Victoriaville in the Province of Breakwater. The nation's largest city is the City-Province of Totwick. The national animal is the Canada Lynx.

The name 'Veritasian' comes from the Roman Goddess Veritas. The reasoning is that Roman religion and Analytical psychology view 'Veritas' as an archetypal symbol of a developed Anima.

On 24 July 2021 a third expedition was launched, and ground was broken in 'Fort Victoriaville' as sight of the new capital. The Commonwealth of Veritasian Canada declared 'Unilateral Independence. Later changed the name to The Commonwealth of Nova Veritasia and Her Dependencies' 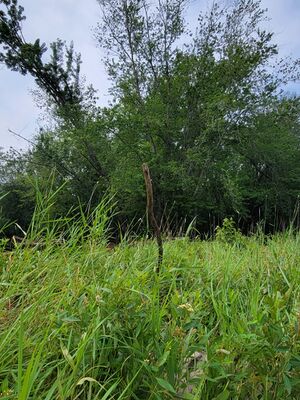 The walking stick of the first expedition to land on the Veritasian Island at 'Queen Elizabeth the Second Point.'

On 12 August 2021 The Aquila met and decided to incorporate additional territory into The Commonwealth. The Provinces of Breakwater, Riechton, and Totwick where founded.

On 21 August 2021 an expedition set out into the Bay of Fundy, and spotted an uninhabited island. The next day claim was laid to the island, and the Province of Romulus Island was established.

The government is headed by the Governor General who also fills the role of Prime Minister. His cabinet are an elected council know as the 'Aquila.' A council of 'Aquilafers,' citizens who have earned higher station through service. The term 'Aquilafer' comes from the Latin 'Aquila' a military standard. The positions in The Aquila are: Surgeon General, First Lord of The Admiralty, Interior Minister, Foreign Secretary, Sky Marshal, and Finance Minister.

The Commonwealth is divided into Provinces. Each Province is headed by a Governor. Each Governor is an Aquilafer, and are regional representatives to The Aquila.

All political offices are considered secondary duties, and office is held part-time, and on an 'as needed basis.'

The Commonwealth divides it's citizens into two castes, Citizens, and 'Aquilafers.' Citizens and Aquilafers enjoy the same rights and freedoms however, Aquilafers may enjoy being elected to political office. A Citizen may become an Aquilafer through military service, civil service, or through the behest of The Governor General.

Freedom of Religion is protected, but the official national Religion is Gnostic Christianity. Those wishing to join the 'Aquila' would also need to undertake philosophical education in Gnosticism, as well as other important cultural aspects. The National Battle Standard is the Canadian Red Ensign Flag from 1921-1957 and serves as the national War flag, Military Standard, and Naval Ensign. 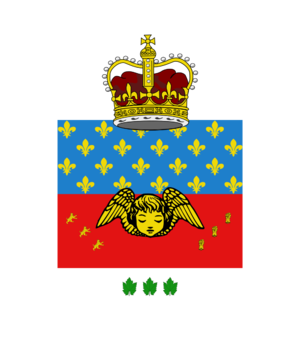 Lesser Coat of Arms of The Commonwealth of Nova Veritasia.

The Shield on the Veritasian Coat of Arms is inspired by the Canadian one. The symbol of the 'Cherub' is meant to represent psychological wholeness. The Canada Lynx is the National Animal. The Iron Fist is the Cavalry linage. The Fleur-de-lis and the Maple Leaves represent Canadian heritage.

The Commonwealth has a Consulate in the Canadian city of Fredericton, New Brunswick.

The Commonwealth of Nova Veritasia consists of 4 disjointed provinces.

Coat of Arms of The Province of Breakwater.

The Province of Breakwater is an island, and the Capital Province. The island is 0.2 miles long, and gently sloping. Fort Victoriaville is located in the 'South-Central Lowlands,' and the 'Lynx Highlands' form the island's northern coast. It's Coat of Arms depicts a snake, which are common on the island. Three Patriarchal Crosses to represent a fighting spirit which was seen in the French Resistance. The torch represents the founding of the nation.

Shield of The Province of Totwick.

The Province of Totwick is a 3 acre property, and the most populated province in The Commonwealth. A majority of Totwick's residents are not Nova Veritasians. The Shield depicts the 3 leaves of Nova Veritasia. The Poleaxe is the personal standard of the Governor. The Wolf depicts the hunting expertise of the people. Totwick is located in a river valley, and has an eastern shoreline.

Shield of The Province of Riechton.

The Province of Riechton is the largest province in the nation. It totals 303 acres and is heavily forested. The shield depicts a Dragon which represents the Anglo-Saxon heritage of the people. The Pentacle represents the faith of the people. The Poleaxe is the personal standard of the Governor. Riechton is bordered by a cliff face on the northern edge, and a marsh along the south.

Shield of the Province of Romulus Island.

The Province of Romulus Island is an island in the Wolves Archipelago in the Bay of Fundy. The island is completely uninhabited, and has little vegetation. The archipelago is home to a wolf sanctuary, and so the shield depicts wolves in the style of a Vexillum. The Province was named after Romulus.