The Tarvitian Cyber Service is the third branch of the Tarvitian Armed forces and takes the place a Navy would in a traditionally structured armed forces. It is the most operationally active Service in the Armed Forces and most notably saw action during the Afrax Value Intervention in March 2019 where it played a major role in the gathering of intelligence and leading the effort against the Former Afrax Colonial Empire. 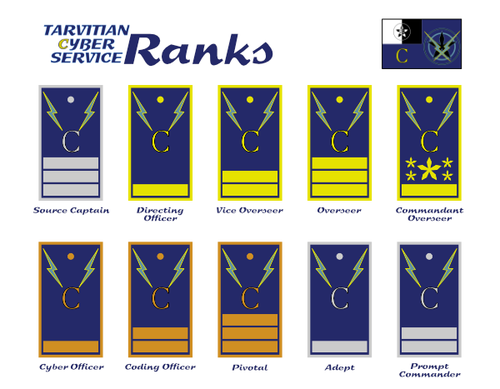 The Tarvitian Cyber Service was formed on the 21st of February 2019 from No. 2 Cyber and Diplomatic Warfare Squadron of the Neuki Army and became it's own independent branch of the Tarvitian Armed Forces. Lord Mayor ACM H Markus ordered it's formation in the interest of protecting the Kingdom of Tarvit from threats online. It's involvement with the values of the Kingdom is one that allows it the distinction of being the most active operational branch of the Tarvitian Armed Forces. The Tarvitian Air Force, whilst the most generally active branch, is mainly active in the training of Tarvitian Citizens and RAF Air Cadets to fly Radio Controlled aircraft rather than operationally deploying.

During the 2019 Afrax Value Intervention, H.M. Rex. Lachlan I activated 4 Squadron Royal Corps of Values in a bid to assist Lord Mayor ACM Heath Markus (Overseer of the Tarvitian Cyber Service) in resolving conflict with a group of macronationals when Afrax leader Thomas "El-Tegani" Elliot remarked about personal problems the Overseer was facing in a micronational capacity. The operation was conducted on multiple platforms in conjunction with a group of macronationals who assisted in tackling the wider conflict outside of the micronational community.

Details of the personal conflict remain unknown. In an official statement by the Tarvitian Monarchy, H.M. Rex. Lachlan included a remark from the Lord Mayor that mentioned stress and relationships.[1]