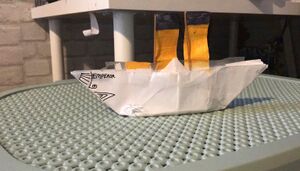 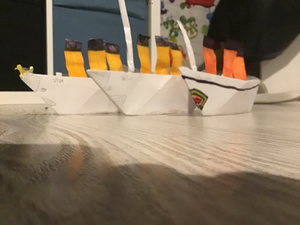 The General was annoyed at the situation in the country, as there wasn’t communism in the way it used to be, and there may have been leftover tensions from the Sprinske Revolution, so he teamed up with the former Prince of Marxtown (His younger brother), and on 3 August 2021, they left the Sprinske Empire to form the Democratic Republic of Sprinske, also known as West Sprinske.

The second battle occurred on 21 August 2021, shortly after the first battle, HMS Emperor got two new sister ships, HMS Viva (Pictured on the left), and HMS Valiant (Pictured in the middle), the ship on the right of the photo is HMS Vulcan, the final sister ship built, but that was long after the second battle. During the battle itself, HMS Emperor sunk the battleship Communist Glory. Communist Glory used to belong to the Sprinske Empire, but when the country split, it was one of the ships that the west took, as it was in a Western Sprinske port.

The third battle was a mission for all 3 Emperor-class cruisers, to escort the Cargo ship HMS Rio De Sprinske, which was carrying ammunition to the frontline. Rio De Sprinske got to her destination, but Viva and Emperor both received damage. Viva lost her gold eagle figurehead, and Emperor had bow damage. Valiant remained unharmed.

The fourth battle commenced on 22 August 2021. Emperor and Valiant protected the shipyards, which were beginning work on the HMS Vulcan, the last of the Emperor-Class ships, before the new Osprey-Class would replace them. HMS Viva, along with two destroyers, HMS Pike and HMS Piranha set out on a campaign to sink enemy ships. They managed to sink 1 battleship, 4 cruisers, 6 destroyers and a frigate. During the battle, Piranha was sunk, and Pike was scrapped shortly after.

The fifth battle was the deadliest, with over 100 sinkings over a period of two days (24 August - 25 August 2021). All three Emperor-Class ships went into battle, as the Vulcan neared completion, and work started on the Osprey. The main target for the Sprinske Empire was the HMS Invader, and the HMS Eagle 2 (the only aircraft carrier owned by West Sprinske). Invader and Emperor finally met each other, the flagships of both fleets. Invader double-torpedoed HMS Emperor, causing it to list to starboard. Viva rushed to help her sister ship, and together, Viva and Emperor bombarded Invader until she lit up with flames, and they kept firing until Invader broke apart and sunk. HMS Viva narrowly escaped a torpedo, before ramming the submarine that fired it. HMS Emperor approached the defenceless HMS Eagle 2, which made the entire West Sprinske fleet target it. A critical hit caused the Emperor to erupt with flames, and burning debris flew into the Eagle 2. Something must have gone terribly wrong on the West Sprinske side, as the Eagle 2 immediately became engulfed with flames, before she completely disappeared, having burned until there was nothing left. The Sprinske Empire still maintains that it was carrying explosives below deck, but it has never been confirmed. The HMS Emperor burned, but the fire didn’t spread very much. By the end of the 5th battle, the entire navy of West Sprinske was destroyed, and it was a giant victory for the Sprinske Empire.

On 26 August 2021, HMS Emperor’s fires were extinguished, and she was put into dry dock. The true extent of the damage had been revealed, she had a giant crack in her stern, her rudder was missing, two of her propellers had disappeared, and her forward funnel had completely exploded, that was the piece of debris that destroyed the HMS Eagle 2. HMS Emperor’s case was referred to the Sprinske Emperor himself, Aaron I. Emperor Aaron told the navy that the damage would cost more to repair than the ship was worth, and told them to sink it in Shedhill for a few reasons, the first was to make it impossible for large ships to get through the Shedhill River as the wreckage would block them, and to keep the ship from being captured by the enemy. Hours later, the ship was scuttled.

After HMS Emperor was sunk, HMS Viva would become the flagship of the Sprinske Navy, even after HMS Vulcan was finished. It would hold this position until the HMS Osprey was launched in September. Following all of the battles, HMS Valiant was scrapped, HMS Vulcan ran aground, and Viva is still in service. Osprey was a much more capable ship than the Emperor-Class, and soon, she had a full class of better ships, HMS Osprey, HMS Emu, HMS Ostrich and HMS Crane. They also built the HMS Spartan, sister ship of the HMS Viking, which was a much older ship.

Prior to the Civil War, Emperor Aaron and the General were planning a supercarrier named HMS Falcon. Falcon would be able to hold 20 C-101’s and 8 C-99’s, and could protect itself from enemy fire. It started construction in July, but it was paused when the Civil War commenced on 3 August 2021. The ship lay abandoned in the shipyard, with some of it’s main features already there. Work continued, but on 30 August 2021, Emperor Aaron I ordered that whatever could be used for spare parts be taken off, and whatever they couldn’t would be burned and used to fertilise the soil of the Agricultural district. The ship was completely gone by 10 September 2021. On 20 September 2021, one of the Sprinske Empire’s spyplanes successfully spotted a shipyard building a new battleship for West Sprinske that could sink HMS Viva or possibly even HMS Osprey with one shot. The next day, the Emperor approved airstrikes on the shipyard, completely destroying this ship, and levelling the entire industrial area of the Democratic Republic of Sprinske.

Without prior warning, the Democratic Republic of Sprinske invaded Spritsnasque, the capital city of the Sprinske Empire. They had to change the capital to Rio De Sprinske, but morale plummeted. West Sprinske almost captured the HMS Osprey, but she was saved at the last minute.

Spritsnasque would remain occupied by West Sprinske until 16 October 2021, when the Sprinske Empire desperately tried to liberate the city, and after a long battle, they took the city back, but Rio De Sprinske remained the capital. On Revolution Day, the Emperor planted a mole in West Sprinske, he revealed the war plan, and when the attack came on 31 October 2021, the Sprinske Empire had a major victory at the Second Battle of Marxtown. 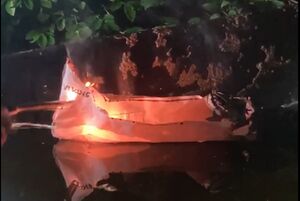 On 5 November, Emperor Aaron and some of the government members went to watch a major event that became known as ‘Solidarity Day’. The HMS Viking, HMS Crane and over 20 captured battleships of West Sprinske were burned and sank to further prevent any ships from entering Shedhill. Viking went down with a giant explosion, and Crane, the last of the Osprey Class, was to be destroyed for the same reason as Emperor, irreparable damage. The ships remains blocked the Shedhill River, and any enemy ships that tried to cross failed. Battles were infrequent from then on, and on 9 December, West Sprinske had become only a government body with no land, as the Sprinske Empire had taken Úrmda, the capital of West Sprinske, and reunited the country.

The war was still going in theory, but no actual fighting happened after 9 December truce. The war was to officially end on 22 June 2022 with the Treaty of Rio De Sprinske, but the Emperor cancelled the original deal, it awaits re-negotiation in August 2022

Support for the Sprinske Empire

The Imperial Republic of Donkrea is a satellite state of the Sprinske Empire. As such, it officially took the side of the Sprinske Empire. Donkrea didn’t join the war due to having it’s own problems at the time, and due to the fact that war wouldn’t be popular in Donkrea only months after the guerrilla attacks from the Gorralic Communist Army ended.