The area that is the Imperial Palace today was first mentioned in a certificate by bishop Heinrich II von Rotteneck in 1279. The region was first settled by Tyrolean settlers around that time. In the 14th century the area became a parish and in 1463 the parish started a silver mining industry. Since then the town has been mostly inhabited by Bavarians. The area that is Chostlingen today was first publicly recorded in 1085. In the Thirty Years' War, both towns were burned down by the Swedes. The area that is now the Royal Overseas Territory of Glendale was inhabited by the Lenape people before Dutch and English settlers came in 1635.

The Republic of Winthroopstan was created by Emperor Dennis I on 14 May 2015. Some months before Emperor Dennis had found out about micronationalism through a VICE video about the "Königreich Deutschland", a monarchy in Germany. He was interested in the idea of micronationalism, but hadn't come to the idea of starting his own nation yet. A short time later, he read about Liberland in a news article, and therefore became fascinated by the idea of creating his own country. Soon after the Emperor declared independence from Germany, and then a poor quality flag was designed(which would later be changed to the current flag). The Emperor based his country's name on one of the characters in his YouTube skits, a bear named 'Winthroop Poop', a British spy who disguised himself as Winnie the Pooh to assassinate Pooh's best friend. This is how the infamous "bear obsession" started. Two good friends of the Emperor quickly became citizens, bringing great enthusiasm to the heyday of the nation. At first, the country was perceived to be joke. Their "mascot" was Winnie the Pooh, and the Emperor's alias was "King Winthroop P.". The King focused on individualism and rebelling against society. He was the absolute ruler and had a somewhat anarcho-communist ideology. Now it is different, as royals and the vice president may decide on elections and policies, but the Emperor still has the last decision. Winthroopstan is a peaceful country, and hasn't engaged in any wars other than a one day war between a small micronation. As of 2017, Winthroopstan has 27 citizens, with territory mostly in the Federal Republic of Germany, but also with houses in the USA , with 3 in New York . They also have a 2 citizens in the UK. Although it's full title is the Republic of Winthroopstan, Winthroopstan is a constitutional monarchy or a crowned republic, with an Emperor and a Vice President, followed by the duke, and then barons and baronesses. The reason it is called a Republic is because the Emperor gave his country the title before he was sure which government type would be best for the nation. Although the new coat of arms closely resemble Slovakia's, Winthroopstan's is unique in its symbolism. The black hill respresents the Imperial Hill on which the palace is situated, while the Byzantine cross represents the nation's proud Christian heritage. The machetes symbolize war, and the crowns represent the Emperor. As with most micronations, the number of citizens has fluctuated with time. At its peak point the population claimed to exceed 60.

Winthroopstan is defined as a constitutional monarchy, and possesses a simple constitution and a civil code , with a new constitution being in the works. In order for a legislation to pass, the Emperor must approve of it. Until 2016 Winthroopstan was an absolute monarchy, with this being changed during the population boom of 2016.

On April 10, 2018, the Emperor addressed in a speech that a state reform would be taking place, since the current government wasn't working well. The campaign was titled "Make Winthroopstan Great Again", titled so because of U.S. President Donald Trump's campaign. The program has had many positive effects on Winthroopstan, with higher security measures, a postal service (Winthroopstanian Postal Service) and better informing of the citizens haven taken place.

Empire of Nedlando-Khorașan (Since August 7, 2017)

The Conservative Party has the bear as their logo, being that it is the National animal of Winthroopstan.

There used to be 4 political parties in Winthroopstan. The most powerful and popular party was the Conservative Party, which was most similar to the United States' Republican Party. The other parties were the SFW (Spandau Party for Winthroopstan) and die Gärtner (the Gardeners), an eco-political party. As stated in the constitution, Dukes and Barons have the right to create their own political parties. All political parties except the SFW have been abolished.

The Emperor is the head of state and the most powerful figure in Winthroopstan, and has the final say over the government. His main duties are to sign treaties, hold elections, open diplomatic relations and make sure all his citizens are satisfied. The Emperor of Winthroopstan is currently Emperor Dennis I. His successor will be his first born son according to the Line of Succession.

The President was the second most powerful figure in the nation. The president was only given simple tasks, such as assisting the Emperor. The president could have also acted as a judge in court and decided how to punish the criminal (usually by banning them from the nation for a period of time). The president assisted the Emperor in deciding the laws. In a general election, the president's vote counted double as much as a citizen's vote. The first president was Mr. Daniel Fruechtl, who was in office from 17 November 2016 to 25 September 2017. The second and last president was Lena S., who was elected on 25 September 2017 and abdicated on May 12, 2018. Due to the government reform, there are no more presidents, the government perceives this ranking as useless.

The Winthroopstanian Military is very small, and is called the "Imperial Armed Forces". There is no navy or air force. There are currently no official members of the army, as the army only exists in dire situations. During wartime, citizens over 14 and under 30 are encouraged to fight for the nation.

Winthroopstan is divided into 8 regions, which include the Imperial Palace, Winnie Portugal (which is not affiliated with Portugal), Hohenwarth, Thenbach, Chostlingen (pronounced Kostlingen), Spandau, Claus Republic, and Glendale. All except one of these regions are surrounded by Germany and therefore one has to enter from Germany to get from one to the other. The regions are given different titles depending on its residents. The former region of Golfingen ceased to exist in December 2017. Baronies are inhabited by 1 baron, while Royal regions may only have Imperial Family members in them. Regions just called provinces if they do not have any royals, archdukes, or barons in them. There is one Winthroopstanian citizen who lives in a different micronation, which makes him not assigned to a region, and another citizen living in Great Britain. The size of Winthroopstan is approx. 267,202 sq. ft.

The climate in the Imperial Palace and surrounding regions is categorized in the Köppen climate classification as Dfb Humid continental climate. The average temperature of 8.5 °C (47.3 °F) is slightly above the German average (7.8 °C or 46.0 °F), the average precipitation of 636 millimetres (25.0 inches) per year below the German average (approximately 700 millimetres or 28 inches). With a total of 1670 sunshine hours per year, Winthroopstan is roughly 120 hours above German average. The warmest month of the year, on average, is July. The coolest month of the year, on average, is January.

Under the Köppen climate classification, using the 0 °C (32 °F) isotherm, Glendale features a humid subtropical climate (Cfa). The territory averages 234 days with at least some sunshine annually, and averages 57% of possible sunshine annually, accumulating 2,535 hours of sunshine per annum. Winters are cold and damp, and prevailing wind patterns that blow offshore temper the moderating effects of the Atlantic Ocean; yet the Atlantic and the partial shielding from colder air by the Appalachians keep the territory warmer in the winter than inland North American cities at similar or lesser latitudes. 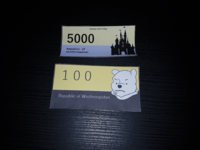 The lower bill commemorates the national animal in a funny manner.

Currently, the official currency is the Euro (€) and the USD ($) for Glendale, but it is planned that the currency will return to the Wimbro soon. The official currency of Winthroopstan was the Wimbro, which was founded by the country's former finance minister. They are only printed in bills, with, 100, 200, 500, 1000, 2000, 5000, 10000, 100000 and 500000 being currently in existence. The exchange rate is currently 1€ = 100 Wimbro. The currency of Winthroopstan was called the 'Shemp' until late 2015, following a small period of time with only the Euro being accepted, and then the Wimbro, but Shemp bills have the same exchange rate and can, therefore, be used. The bills are marked with a special stamp to prevent forgery. Euros are also an accepted form of payment, which makes the Wimbro useless. In 2016, the 100 Wimbro bill was created with a joke motive of Winnie the Pooh smoking a cigarette on it. There are currently about 1,400,000 Wimbro and Shemp bills in existence, which is equal to about 14.000€, or 16.849,49$.

The culture of Winthroopstan is very unique because it is a true blend of American and German culture. About half of the citizens grew up speaking Bavarian, a regional dialect of German. The national animal is the bear, due to it being the favorite animal of the Emperor. There is a motorcycle club in Winthroopstan, jokingly titled Motörschoas. The Claus Republic has its own unique culture, which is similar to Czech culture. is in the making. Many Winthroopstanians are interested in medieval history, and wear medieval clothing. A plague doctor has been operating in the nation, treating victims of the bubonic plague.

Bilingual sign at the border crossing between the Imperial Palace and Germany.

The most commonly spoken languages of Winthroopstan are English and German (and the Bavarian dialect). German is spoken in every region except Glendale, while English is only spoken in Glendale and partially in the Imperial Palace. The Winthroopstanian language is not used in daily conversation and is currently only in its beta form. 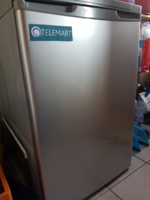 There is a wide variety of cuisine in Winthroopstan. American, German and other foods are commonly eaten in the nation. The former national dish was a special kind of pancake, made with dinkel wheat. A Telemart has been operating in the Imperial Palace since 28 May 2017, providing food to the Emperor and his family. Since October 2017 the Winthroopstanian Telemart has been selling foods and drinks to the citizens in Wimbro. 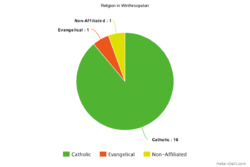 The official religion of Winthroopstan is Christianity , in particular, Catholicism. Being mostly located in a very rural, non-diverse area, most Winthroopstanians are of the same religion. Many citizens take their religion very seriously, and some visit foreign churches on Sundays.

Winthroopstanian media dates back to 2015 when the country was founded. There were many skits produced in Winthroopstan on YouTube, by the highly adored comedy channel "gangsterpooh". The skits focused on making children's shows funny for adults, featuring characters like Winnie the Pooh or Kermit the Frog. The YouTube channel shut down in 2016 and since then the only source of media at the moment is a small news section on Winthroopstan's official website. Many rumors have been heard of gangsterpooh making a comeback in the future and making dubs of children's shows. In the future it is planned that a Minister of Media will be elected and YouTube videos might be made, possibly discussing micronational news. 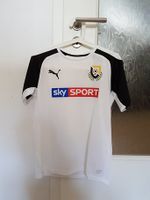 There is no current national sport, but there is a football team in Winthroopstan, the WFA (Winthroopstanian Football Association), which was founded on January 19, 2017. The team has eight members, and although they haven't had any matches yet, there is an official team jersey.

Many citizens enjoy sports such as hockey, basketball, badminton and most of all, football.

Winthroopstan observes the same holidays as Germany, except German Unity Day. Instead, Winthroopstan celebrates Foundation Day, which is on May 14, which honors the day when Emperor Dennis I founded the nation.