The Republic of Bokonton (formerly known as the Republic of Biokinton) was a territorial micronation located in the south west of England. Bokonton was founded on 28 October 2007 by its leader Evren Filgert, who remained its sole leader throughout its existence. The micronation effectively collapsed in late 2010, and its former capital became the Austenasian Town of Porthbokon.

Soon after founding, Bokonton's name was changed as the name "Biokinton" was resemblant of the Super Mario Land boss of the same name. The micronation was judged negatively due to this initial name, prevented from joining many intermicronational sites and due to micronational-peer pressure had to drop the name.

The Republic of Bokonton was founded on 28 October 2007 by Evren Filgert, who became its Queen (she did not use her current name at the time).

A "War with Putneystan" began in May 2008, from which Bokonton had emerged victorious by September/October later that year. After peace talks, Putneystan was annexed by Bokonton in late 2008. Launcestonia and the Launcestonian Gardens were annexed in January 2009. Orkadland was annexed before Launcestonia, probably alongside or soon after Putneystan.

Bokonton joined the Grand Unified Micronational on 23 May 2009. It later joined the Organisation of Active Micronations in March 2010, but withdrew along with four other members in the June 29th Incident.

By May 2010, Bokonton no longer controlled Launcestonia and the Launcestonian Gardens. After a rocket launch in July 2010, activity by the government seems to have rapidly decreased, with control over all but Natillyah being lost by the end of 2010. Bokonton is thought to have existed in name only by May 2012.

As the Republic of Bokonton was only a de facto republic in its early founding days, confusion, embarrassment, and many misunderstandings resulted as it took on the characteristics of a monarchy despite remaining a de jure republic. In August 2009 Bokontonians began referring to it as a Kingdom, but a name change was never officially instigated.

Bokonton always remained a republic and although ruled by a monarch, operated with the Monarch as a provisional ruler. If enough citizens had formed their own political party and announced their intention to have a democratic election, the monarch would have stepped down.

Bokonton employed a ParaTroop Service, but this was used strictly for intelligence missions and the force only included two parachutes. It was based in Natillyah, and was also known as the Royal Bokonton Air-Force.

The Republic of Bokonton was allied with:

Bokonton was a member state of:

In May 2009, Bokonton controlled five territories:

By May 2010, Bokonton had lost control of Launcestonia and the Launcestonian Gardens. Citizens of Bokonton (who joined through the micronation's website or by contacting the Foreign Affairs minister by e-mail, message-board etc.) were invited to declare a room, or indeed their entire house, to be an embassy for the country by taking a photograph displaying Bokonton's flag within their dwelling, a style made popular by such micronations as the Kingdom of Lovely and used by others such as the Slinky Empyre. 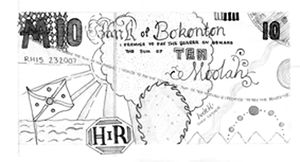 Bokonton used the Moolah (pronounced MOO-Lah), also known as the Bokonton Dollar, which was traded inside the nation and was equivalent to 1.5 GBP and 2.14 USD; each Moolah consisted of 100 Zii (pronouced ZEE), the Bokonton Penny. Bokonton planned to issue stamps and physical coins/notes, but the progress made on these initiatives is unknown.

Bokonton circulated both the Moolah and the British pound sterling (£), but had hoped to become financially independent, with the GBP being gradually phased out of Bokonton. It was announced in April 2009 that Bokonton was finalising details for the design of a Ten Moolah note with a banknote artist, some of which had been made by July later that year.

Bokonton was a secular state, with religion being the personal choice of each citizen. Both Nortonism and Christianity were well-practised within the micronation, and many citizens were atheists.

Bokonton had two flags, the National Flag and the Royal Flag. The Royal Flag, which was adopted at some point between January and September 2009, consisted of a grey cloud in front of a red saltire on a white background, these three colours being the national colours of Bokonton. Between each arm of the saltire was a coloured dot, each representing an area of Bokonton (see above).

The National Flag was adopted in September 2009 to represent Bokonton, consisting of the three national colours in horizontal stripes of red, grey and white. The old flag became known as the Royal Flag and was used to represent the Queen, who also had a Royal Crest.