From MicroWiki, the micronational encyclopædia
(Redirected from Principality of Runnymede)
Jump to navigation Jump to search

the Republic of Worrell, Matthew Cunningham who was also the Kaiser of the Kaiserreich of Springton is an enclave and exclave independent entity claiming to be an independent sovereign state, however, it is more commonly known as a Micronation by external observers such as the United States and the United Nations. Runnymede is an Empire with it having multiple Provinces, Overseas Territories and Autonomous Administrative Regions. Runnymede has been apart of multiple "Wars" including the LENS-Runnymede War which was started by former Prime Minister, Charles Madgett who is also the king of Ela 'r' Oech. The two nations do not recognize each other after the start of the LENS-Runnymede War. The Principality of Runnymede has significant land borders with the United States of America with the nation primarily being located within the USA. It has limited maritime borders to Canada and Russia. With a population of around 50-100ish roughly, Runnymede ranks as one of the medium populated Micronations of the United States and of North America as a whole. The national capital of Runnymede is Amesston with the most populous city being Amesston also. The LENS-Runnymede War resulted in a 9 Month dissolution and inactive period where Runnymede was dissolved / defunct as a nation however it was "Re-Founded" on December 7th, 2021 by Terry Arthur McKeen III. Runnymede is considered a Superpower by Micronational Terms with it having much more land area than other Micronations and more than even some Macronations such as Monaco and Vatican City,

The Principality of Runnymede was founded on the 15th of July, 2020 by the former Kaiser of Springton, Mathjis Von Bingen shortly before Springton collapsed. Springton collapsed just one day after Runnymede was founded. Shortly after the nations founding it started to connect with Charles Madgett and his Micronation, Ela'r'oech. From there, Madgett became a MP aka. a Member of Parliament. From there, he proposed much legislation that benefited and also harmed the nation sometimes simultaneously. Later on during the November Runnymeden Prime Minister Elections, he rose to power and became the Prime Minister of the nation. After the nations founding however, Runnymede quickly began to gain citizens via the platforms that are Reddit, Discord, Twitter, and other forms of social media. These kept the nation together and kept citizens living outside of the nation across the world abroad informed.

The Principality of Runnymede had a history regarding Elarians and Ela'r'oech and has had major accusations of Anti-Elarian behavior. These claims have mainly been supported through screenshots and quotes used against popular Runnymedens, such as the Prince and major members of Parliament. Later on, the Prince of Runnymede proved the accusations true which is featured in a screenshot.

The term "Anti-Elarian" mainly started being used on November 1st, 2020.

The end of Anti-Elarian behavior came in the form of Charles' policies as the Prime Minister of Runnymede. After months of attempting to become the Prime Minister, he is the first Elarian and Independent (later changed to Conservative) in office. He introduced policies that prohibited discrimination legally and personally for anyone regardless of nationality, it was however made specifically known that Elarians were also counted in this.

Other accusations of Anti-Elarian Discriminatory Harassment came up during the Worrellian Presidential Election when Terry McKeen III, Matthew Cunningham and Daen Guut were accused of harassing members of Elarian Parliament. 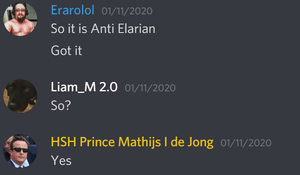 Members of the Runnymeden discord admit to the nation being inherently Anti-Elarian. A form of discrimination against Elarians.

Many members of the Parliament reported this saying that Hate Crimes and Cybercrimes were committed against them. There is no evidence of any of this as of late-2021 in December 7th during the re foundation.

After Charles Madgett joined Runnymede and became a citizen of the Principality, after a couple of attempts he ran and became the Prime Minister of the nation of Runnymede. After becoming the Prime Minister of the nation, PM Madgett I decided to pull Runnymede out of the Micronational Assembly or M.A. which was supported by the citizens. He, however more selfishly, decided to attempt to pull the nation into LENS or League of Elarian Nations. The Prince refused to do so however, He announced that the nation would be staying in the Micronational Assembly and would not be joining LENS. A democratic solution was proposed by Prime Minister Madgett, which would have a referendum whereby Midnight of January 3rd, 2021, it was decided that Runnymede would be leaving the M.A. and would be joining the LENS. The prince refused to do so however, and he demanded that another vote shall be held. The Parliament on behalf of the Prime Minister agreed to go along with the idea and by the 4th or January 2021, The people had spoken once again. They decided that Runnymede should leave the M.A. and join the LENS. The prince refused however and decided to dissolve the Parliament. Prime Minister Madgett then decided to form LENS-Runnymede and declared that "The following nations of Ela'r'oech and all of LENS are declaring war on the Principality of Runnymede". Runnymede was not willing to back down; however, dozens of threats of shooting and bombings were sent to LENS. LENS refused to respond so Runnymede and high-ranking officials of Runnymede began to raid the discord server and attempt to leak Madgett's personal Wi-Fi with them claiming to gett his address and - though Madgett was unaware of it - they had been threatening to leak it on a pedophile website. After being made aware of the attempted leak, he told them to post his address. Matthew Cunningham proceeded to post a former address of Madgett's, to which Cunningham was laughed at. Madgett proceeded to post his actual address, claiming nothing would happen. From here, the citizens of Runnymede went to the LENS discord server and raided it another time, supposedly leaving the stock market uncapable of functioning, though Madgett later stated with photographic evidence that all stock market logs were offline and posted by receipt paper. Charles Madgett then nuked the Runnymeden Discord server rendering the government useless and unable to properly function. After this, on March 31st, 2021. Runnymede dissolved and went defunct as a nation.

Currently Terry Arthur McKeen III is the Prime Minister of the nation with Matthew Cunningham being the "Prince" although the Prince's title is simply honorary with him having little to no say within the nation. The Prime Minister does all of the work mostly.

The Prince is the Head of State or "HoS" of the Nation. Matthew Cunningham, The Current Prince has been in office as the Prince since the title was established with he having a lifelong term. Matthew Cunningham even though he is the Prince much like the Queen of England, He was little to no say in Parliament. The Prince is a Liberal with him having founded the Liberal Party of Worrell during his time as President and then later Vice President there. Runnymede's ruling political parties are the Far-Right Conservative Party, Far-Left Socialist Party, and lastly but not least the Moderate Liberal Party. Prime Minister McKeen is a member of the Conservative Party with him having some, yet very few liberal views.

The land that the nation sits upon primarily is almost completely covered with dense groves of pine tree's with oak tree's dominating the landscape just outside of Amesston, The Capital. Part of the nations border with the United States of America is naturally made by a creak known as "Crum Creek". Typically, the nation is warm and humid during the summer time with there being dry heat with little to no rain during the summer. 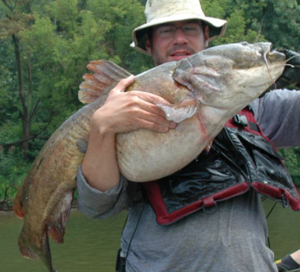 A fish caught in Springton Reservoir by a citizen of Runnymede while he was out on a fishing trip.

In and near / around Runnymede, large fish are often caught especially within the Springton Reservoir, One of the nations largest bodies of water that is has easy accessibility to. Typically in Springon Reservoir, Citizens will fish. The Reservoir is often stocked by United States of America "DEM" with fish. The fish that can be found within the reservoir are Trout, Pike, Bass, And Other kinds of fish.

The eagle is the national animal of Runnymede with there being one on the olden days flag, now the national standered and the coat of arms. Eagles can be found thought the nation and are commonly building nests in and around / near the nation. Other animals that can be found near and within the Principality of Runnymede are "game" as they are called such as Deer, Many deer's can also be found around the nation and the Royal Family enjoys hunting them for sport during the hunting season. Some other animals are birds.

Some of the birds that live within, near, and around Runnymede are Robins, Cardinals, Ravins, Other Rens, Eagles, Vultures, Sparrows, Gold Finches and other types of Finches and even some Parrots in an overseas territory of the Principality of Runnymede.