From MicroWiki, the free micronational encyclopædia
(Redirected from Luca mirante)
Jump to navigation Jump to search

Luca Mirante is an Italian micronationalist. He is known as the president and founder of the Democratic Republic of Luxe.

Luca Mirante was born in Trento, Italy in 2005. In 2009, he created Luxe in his room, considering it a city in his region. After several advances in his city, he inquired about micronations, and in 2014 he founded the Oligarchic State of Luxe, declaring himself as its president.

The state saw numerous other people's memberships and many twinnings with other micronations in its area, and as such it continued to develop its dream until 2016, when Luca established the Democratic Republic of Luxe and formally declared independence from Italy; relations between the two entities continue to be friendly. Due to Luca's contributions, the government of Luxe receives 10 euro per month.

His next step is to definitively establish the constitution of the state and to have a coin company minted. Currently Luca Mirante resides at Luxe and has brought his status to 40 inhabitants with a surface of 55mt2. In 2018 he obtained the citizenship of the Republic of Damazia and in 2019, founding in Damazia the Luxo-Damaziano Democratic Party, and a candidate Senator of Damazia. on 2 January 2019 he was appointed senator of Damazia. The Senate is dissolved in May and removed from office. In 2019, he became parliamentar with Partito Democratico Forza Luxe and, in the Luxe 2019 Parliamentary Elections his party obtained 5 out of 10 seats. When he starts to obtain power, he created the Mirante's.

When Luca Mirante starts to has got a lot of companies, he created the Mirante's, a company over all the others: 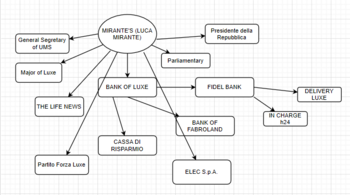