From MicroWiki, the free micronational encyclopædia
(Redirected from KDI)
Jump to navigation Jump to search

During 20 June 2009, it was decided to revive the old tradition of the "Patriotic Parade Day", a national holiday which was used during the Kaznian Empire which involved a military parade and other celebrations, however the modern Patriotic Parade Day will be known as "Patriot Day" and will be held on November 1, the same day as the original Patriotic Parade Day. 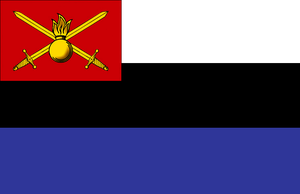 The flag of the KDI, designed during early 2008

The KDI has many subdivisions:

The KDI manufactures "Splinter Guns", which have two settings: lethal and shock. Recently a quick reloading Splinter Gun was manufactures in Serov, Stettin. A variety of other equipment is used, some manufactured in other countries, such as Britain and other European countries, and some is manufactured in Cheslovia. Recently, whilst viewing the Cheslovian National Archives, the KDI are studying schematics and blue prints the were created during the Kaznian Empire, most plans are currently top secret, although some plans include a small "zeppelin" bomber, these plans were to be used in conflict against Chivaliers and The Clan, but many of them were never even built due to a shortage in resources. To this day even modern KDI equipment is kept secret.

Although Malokaz has no army, the do have generals and military advisers. The Cheslovian KDI contribute to the KDI with its troops and equipment.

Ranks of the KDI

Note, "Supreme Commander of the KDI" is not a rank.

Since the days of Russland in early 2006, the concept of a uniform has played a major and succesful role in promoting pride and dicepline in the KDI Army, it is as much a symbol to the KDI as a flag would be as it shows the national military tradition and culture of the nation. The uniform of the KDI Army is perhaps the most distinctive uniform in all the KDI, it has remained largly unchanged since the late days of the Principality of Kaznia in 2007, it is based on the Imperial Russian uniform of the First World War. Although other uniform do exist in the KDI, the KDI Army uniform is used by many other branches of the KDI due to its durability, warmth, moderate camoflage and simplicity.

During the time of the Kaznian Empire, military uniform was largly based on "smartness" instead of camoflage, and was based on the Imperial Russian uniforms seen during the Napoleonic Wars.