Irevan (/ɛrəˈvɑːn/, E-rə-VAHN Azerbaijani: İrəvan), officially the Republic of Irevan (Azerbaijani: İrəvan Respublikası [ɛrəˈvɑːn ɾespublikɑˈsɯ]), is a country in the South Caucasus region of Eurasia at the crossroads of Eastern Europe and Western Asia. It is bordered by Armenia to the east, the Ezidkhan Democratic Republic to the north, Turkey to the northwest, Azerbaijan (exclave of Nakhchivan) to the south.

The name of the city of Irevan is mentioned in the historical sources Eravan, Yerevan. There are various etiologies about etiologically root. It is known that the city was founded by Urartian Tsar I Argisti during the Soviet era. According to the Azerbaijani version adopted by world academics, Iravan's toponym is based on the word "avan" meaning "country", "earth", "village", "city" with "ir" Turkish ethnoi, which means "male", "brave" in Turkish and the "country of the brave". Armenians claim to be an Armenian based Armenian by linking the Iravan toponym to the name of Prophet Noah. At different times it was the center of the Chukhursad, Irevan Khanate, Iravan province. By the decision of the Azerbaijan Democratic Republic in 1918, Fatali Khan Khoyski was favored by the Armenians in order to abandon their claims to Karabakh. The negotiations resulted in the signing of “Peace and Friendship” agreements on June 4.

Some historical sources say that the name Irevan was written for the first time in the 7th century AD. From the city of the Urartian state, I Argisti, They claim that the ruins of the Erebuni fortress built in 782 were erected nearby.

The village was later rebuilt in 810 AH mosque, according to Evliya Chalabi. 105 years later, Hijri began to build a castle in this village by Rajanqulu khan Gajar, the commander of Shah Ismail, in 915. The fortress was called Ravan or Irevan Fortress, which was completed in 7 years.

Before the era of Irevan, the Bronze Age remains of 4000 were found. During the Ahamen era, he was part of the Western satrapy. In 585 BC, the Skyscracks and the Midianites destroyed the Tower of Teisebaini, north of the city. It is not known what happened in Irevan until the third century AD. In 658, the city passed into the Arab Caliphate.

Was declared a presidential republic in the state-building. Republic of Irevan’s president is Tahir Akhund and also country’s vice president is Ali Seidzade. As well there are Parliament in the Government and members of Parliament can choose in the elections about the important decisions for the Republic’s future.

Republic of Irevan’s second government was established. There are some ministries, state committees has been established from Parliament’s elections.

According to president Tahir Akhund’s decision, Republic of Irevan’s National Anthem was accepted.

A new state committee was founded from state. It was named “States Committee of the Irevan Republic’s Religious Affairs”. Chairman is Atuf Gulubayli.

Ministry of Defence was created from the elections of Parliament. Murad Abbas, was selected Minister of Defence of Irevan Republic.

Irevan has an average height of 990 m (3,248.03 ft), with a minimum of 865 m (2,837.93 ft) and a maximum of 1,390 m (4,560.37 ft) above sea level. It is located on to the edge of the Hrazdan River, northeast of the Ararat plain (Ararat Valley), to the center-west of the country. The upper part of the city is surrounded with mountains on three sides while it descends to the banks of the river Hrazdan at the south. The Hrazdan divides Irevan into two parts through a picturesque canyon.

As the capital of Western Azerbaijan (Armenia), Irevan is not part of any marz ("province"). Instead, it is bordered with the following provinces: Kotayk from the north and the east, Ararat from the south and the south-west, Armavir from the west and Aragatsotn from the north-west.

The Erebuni State Reserve formed in 1981, is located around 8 km southeast of the city centre within the Erebuni District of the city. At a height between 1300 and 1450 meters above sea level, the reserve occupies an area of 120 hectares, mainly consisted of semi-deserted mountains-steppe.

Irevan features a continental influenced steppe climate, with long, hot, dry summers and short, but cold and snowy winters. This is attributed to Irevan being on a plain surrounded by mountains and to its distance from the sea and its effects. The summers are usually very hot with the temperature in August reaching up to 40 °C (104 °F), and winters generally carry snowfall and freezing temperatures with January often being as cold as −15 °C (5 °F) and lower. The amount of precipitation is small, amounting annually to about 318 millimetres (12.5 in). Irevan experiences an average of 2,700 sunlight hours per year.

In 2018, Irevan had its warmest February and March since records began in 1885, as another sign of global warming.

Irevan is subdivided into four administrative divisions. Of these, three are provinces, known as marzlar or in the singular form vilayat (vilayət), ayalat (əyalət) in Azerbaijani. Subdivisions of Irevan are 1. Kotayk, 2. Armavir, 3. Ararat and at last, 4. Irevan. There are three provinces and 1 special status city (Irevan, capital of Irevan Republic). Government is Provincal Government and National Irevani Government.

Armenia to the west, Azerbaijan (with Nakhchivan exclave) to the south, Turkey to the northwest.

Irevan currently has 16 registered citizens and is home to a number of ethnic groups. Irevan citizens belong to the three major ethnic groups: Persian people, Slavic people and Turkish people, and collectively compromise the vast majority of Irevan citizens. Because of this, Irevan is religiously divided between Christianity, Unaffiliated and Islam.

There are government representatives from the last decision of president Tahir Axund and elections of Parliament of the Irevan Republic.

Azerbaijan culture is tightly bound with the history, religious beliefs, national traditions and values of the country. Its history goes back to primitive times, passes through pagan temples, monumental architectural constructions of the early Medieval Ages, relates to the Islamic culture, reflects the influence of Russian traditions and brings this legacy to the modern world.

Culture of Azerbaijan has also been formed under the influence of Islamic traditions. During the period of Arab conquest, many architectural constructions have appeared: mosques, mausoleums, minarets. Geometrically correct shapes of the buildings were adorned with exquisite patterns and arches. Later t regional schools were established; each region had its unique style. For instance, sculptors of Nakhichevan paid more attention to the finishing of the buildings using ceramics. Masters of shirvan-apsheron school would stand out with succinct combination of architectural forms and smooth walls.

Islamic culture of Azerbaijan flourished in the period of the Seljuk state. Today tourists enjoy the rich legacy inherited from the architects of that time: mausoleum in Juga, Momina-khatun mausoleum, Yusuf ibn Kesseyir mausoleum. Famous Maiden Tower in Baku was also constructed in the times of Seljuks. Few centuries later, the stone legacy was replenished by Nardaran fortress, round castle (Mardakyan), “Bail rocks” and others. Ceramic schools of Azerbaijan, namely Bailakan and Ganja, were born in that period. Classics of Persian literature and poetry had a great impact on the Azerbaijan art. Namely, Shirvani, Ganjavi and of course, Nizami with his well-known cycle of five poems “Khamsa”.

Gobustan petroglyphs describe an ancient Azerbaijan culture in manuscripts that reached us through millennia. Already in the Mesolithic Era, unknown artists captured significant moments of community life on stones. The drawings reflected hunting, environment, ritual customs, dances and others. Stone and ceramic figures of people and animals have been preserved dating back to the epoch of Neolithic. There are remains of the ceramic dishes of that period in the museum archives discovered on the territory of the modern Azerbaijan.

Azerbaijan traditions found its reflection in the décor interior: house walls of wealthy people were decorated with exquisite patterns with elements of planting motives. Carpets were indispensable attribute of each house regardless of the welfare of its owner. Azerbaijan carpets are still a signature of the country as well as the most spread local craft. Thanks to popularity of this applied art in Azerbaijan, there are several schools of carpet weaving known beyond the country. The best exhibits adorn private collections and halls of the famous museums of the world. 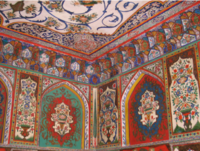 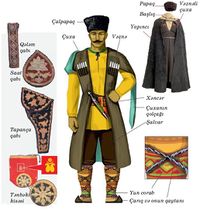 Azerbaijan national costume deserves a special attention. Clothing elements and range of colors differed from region to region. But in general, the costume highlighted modest charm of women and natural strength of men, as well as Azerbaijan customs. Jewelry art of Azerbaijan has elements of traditional Arab décor, but has distinguishing marks. They are mostly big in size and elegant with filigree articles, enamel and precious stones.

Music culture of Azerbaijan is so significant that traditional mugams (folk musical compositions) are enlisted in the UNESCO Cultural Heritage and compositions of Azerbaijan authors are played in concert halls of the whole world. Development of Azerbaijan music is tightly connected to the history of Azeri literature and poetry. As mugam is an art that combines epics of eastern poets and a musical improvisation in a particular local way.

A special highlight of Azerbaijan culture is theatrical art. Its history encounters many centuries, originating as a folk theatre. Simple scenes showed life of working people mixed with Azerbaijan traditions and customs. On public holidays and outdoor merrymaking, theatrical groups organized small satirical staging that reflected moral values. It is no surprise that with such a rich history, Azerbaijan theatre today offers plays in different styles and outstanding performance.

Diversity of Azerbaijan culture is just a small part of the great legacy that this beautiful Land of Fire conceals. In the journey, make sure to touch spiritual piece of Azerbaijan to get a deeper insight into its history, values and life.