On 2 March 2005, Paul Stevenson and George Wilson founded two micronations, named Kingdom of Northwood and Kingdom of Tower Hill respectively. They planned to work together at first, just for fun. On 14 March 2005, Paul Stevenson gave himself the title of King of Northwood, Protector of Westvale, and also around the same time George Wilson honored himself as King of Tower Hill. On 18 March King Paul opened the Bank of Northwood and started printing bank notes, but later in the month the Bank had to stop printing due to a small independence movement in Westvale. King George of Tower Hill protested to King Paul that he cannot do anything about it, as Westvale was not part of the Kingdom of Northwood so King Paul stated that he would correct that problem, and invaded Westvale on 20 April 2005. The invasion went smoothly and on 30 April 2005, a victory parade was held near the race track in Westvale.

Relative peace was happening for the next few months, but on 23 January 2006, what is known as the Westvale uprising occurred. After a small battle, the rebels won and the Northwoodian Armies retreated. After attacking again, the Northwood Army could not gain control and abandoned all of Westvale's Fantail sector. After another large rebellion in the East on 5 February 2006, King Paul requested the help from their allies, which included the Kingdom of Tower Hill and the Kingdom of Misthasia. No reply came from any of their allies and on 11 February 2006, King Paul lead another assault upon Westvale and finally took the enemy base. King Paul could not keep hold of Westvale and on 15 February 2006, the newly formed Republican Army took the Fantail Sector and the Johnny Todd sector.

As the stronghold was in the Johnny Todd sector, the Northwoodians were surrounded. On the 17 February 2006, King George of Tower Hill declared war upon the rebels and tried to liberate the trapped Northwood Army. After relieving them, both Kings set out for sectors to capture. Tower Hill was set at capturing the Central and Johnny Todd sector and Northwood with the North and Fantail sector. All was going well for the Tower Hill Army and the Northwood Army until they came together at the Fantail Sector, around the railway. The battle became a disorganized disaster, when King George ordered an attack before King Paul was ready and the entire force was destroyed and most retreated. King Paul quickly ordered his men in, but it was too late. No one could see where their forces where and King Paul and King George quickly ordered a retreat. On 3 March 2006, both Kings surrendered to the rebel leader and left.

Union of the Crowns

On 2 April 2006, King George requested that the Kingdom of Tower Hill be merged with the Kingdom of Northwood, due to Tower Hill becoming very vulnerable to Westvale's growing strength. As new monarch of Northwood, King Vincent accepted the proposition and took the title of "King Vincent of the United Kingdoms of Northwood and Tower Hill, Emperor of the Southdean territories". Peace has lasted since the Union, and after King Paul's abdication, and the ascension of his brother Vincent. King Vincent also requested that the Empire sign the Treaty of Aintree, to further foreign relations. 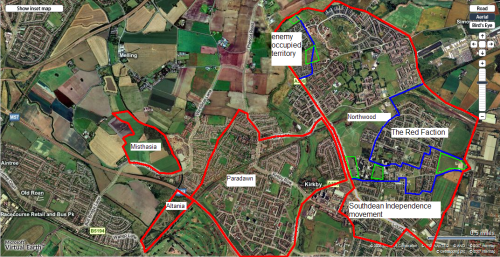 Map of Northwood and its surrounding micronations during the civil war.

On 9 March 2009, King Vincent was informed that the territories of Southdean had rose up in a bid for independence, lead by Trevor Howrth to form a new state. At the same, time General Jacob Frobisher had begun an independence movement in the South-East, named "The Red Faction". After defecting from the Northwood Army, he saw his chance and rallied a small group of followers. The men began to systematically remove any presence of the Empire and set up defences in Park and other open areas. The Red Faction has allied itself with the Empire in destroying the Independence movement and try to keep its own independence. General Frederick Remus then renamed himself to General Frederick Rommel on the day of the S.I.M bid for independence and took command of the entire armed forces. The new S.I.M government ordered an invasion of the Kingdom of Altania to secure a homeland for them if they are pushed out of the Empire. On 10 March 2009, another unknown force from the Northern Sector invaded the Empire and captured the north western part of Northwood. The attack on Altania was called off until a later date. After, the Northwood Army attacked and the force was moved to the border.

The ceasefire between The Red Faction and the Empire of Northwood ended on the 16 March 2009, when The Red Faction invaded and came up to join High Union of Nations Coalition Army and the Northwood Army. The Faction reached half a mile north, until they were pushed back about one quarter of a mile and they held ground there. The battle lasted from 5:40pm – 6:50pm with a coalition victory and the Faction was pushed back across the border.

Whilst in a meeting with King Ian the Great of Camuria, a DVD was sent for the two leaders to view. It showed the Red Factions flag being raised over the lands north of the river Alt that were occupied by the Kingdom of Altania. King Vincent and King Ian II both started negotiations but King Daniel of Altania begun preparations for a counter attack, despite warnings from The Red Faction.

On 28 February 2009 Emperor Vincent was informed that a new micronation named Paradawn had broken away from the People's Popular Socialist Republic of Bzan, a constituent country of the Union of Socialist Micronational Republics. Emperor Vincent accepted the alliance with the Kingdom of Paradawn.

The Empire of Northwood had formerly maintained diplomatic relations with 4 nations.

Northwood's only land border is with Paradawn to the south west. 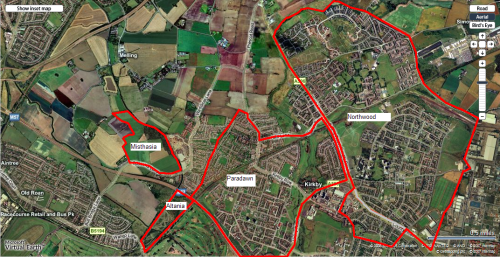 Map and aerial view of Northwood and its surrounding micronations.
Retrieved from "https://micronations.wiki/index.php?title=Empire_of_Northwood&oldid=858522"
Categories: