The Colony of Iego, also known as Iego, is a micronation in Australia. It was founded on January 1, 2010. It was succeeded by the A1.

The Colonial Government was formed in early 2010 by the Governor after it was deemed that Australia had now lost all sense and was not fit to control all of its territories. A large landmass around the Illawara area of NSW was acquired and quickly joined the colony.

In early March the first elections were held and the Colonial party led by Joe Bloggs gained an impressive victory against the Liberals. By the 23rd Phase I of the International Publicity and Propaganda Act (2010) was well underway with the creation of an official email and MicroWikia page under the direct command of the Prime Minister.

The main geographical feature was the Clerregge River, which runs around the area in various forms and was the main area of operations for the navy.

The Iego Capital Territory, or ICT as it was colloquially known, was the capital of the Colony of Iego. It was the first town to be taken upon the declaration of independence and was the home of the Parliament and Governor's Offices. The main features in the Territory were Governor's House, Capital Stadium, the Capital Tree and the Colonial Museum.

The Government consisted of the Monarch's representative, the Governor and the Parliament led by the Prime Minister. There were twelve MPs from the different states who sit in Parliament, with six from the Colonial Party, four from the Liberals, one from the Greens and one from the Freedom Party.

Dissolved and succeeded by the Kingdom of Cooriengah: 1 December 2010

The Flags and Symbols of Iego were decided upon at Foundation, they mainly incorporated the national colours of Maroon, Black and White. The flag consisted of a Maroon vertical block on the left and then three horizontal stripes, two black with a white one in the middle. The Shield had a chequered pattern with black, handwritten text. The flag flew in several locations notably the Governor's House, Port Woronora and at the Capital Building. 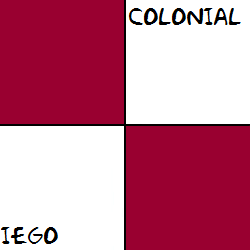 The Colonial Combat Forces (CCF) consisted of an Army and Navy which were headed up by the Ministry of Defence (MOD). All forces were taking part in Operation Liberation which related to the capturing of land for the Colony. During peacetime, they operated as a small civil guard and as support for the Police.

The Colonial Army was the core group of the military, the largest group within the Ministry, and consisted of many Australian Cadets. Due to strict Australian laws only people with gun licences (About 70% of the Army) could have used any form of firearm including Airsoft and BB guns, so the majority of the army were issued with Airsoft and others were given Nerf or similar weapons.

The Navy was the Secondary Department of the Military, consisting of a small group of sailors and technicians, who operated a small fleet of Canoes and Boats which were designated by the INS (Iego Naval Ship) prefix on their hull. The Navy was based at INS Port Woronora, a small public Jetty, and a nearby officer's house. The fleet flagship was the INS Governor, although plans were being made to produce a ship similar to Egtavia's Battleship 1 as a capital command ship.

The Military Intelligence Division was the third 'force' in the CCF and was the only intelligence agency in the Colony. It was responsible for the defence of the colony from external threats. The Division was headed up by the Director, who was equal in rank to a Staff Sergeant, and maintained strong links with the Colonial Constabulary. Due to security reasons, only limited information could be disclosed about this organisation.

The economy of Iego was very small and started up nearly bankrupt, but in later months under the leadership of Chancellor of the Exchequer, several small one or two manned businesses were established, including small food establishments, few item stores and people for hire. This led to the proposed creation of an Iegon Stock Market to assist in government funding.

Iego was open to communicate with any micronation.