The ASEA Claiming Conflict was a dispute between the Federated States of Antarctica and Antarctica's Elain of Atilnia over Antarctic territorial claims. A map drawn and posted on the wiki of the ASEA was perceived by President David Powell of the FSA as an attempt to claim territory that has been under the sovereignty of that nation since its founding on January 25, 12009 (2009 CE). President Powell had stated that if the claims were not dropped by 12pm McMurdo Standard Time on January 6, he would issue a formal declaration of a state of war. When President Powell posted a similar map showing the specific enclaves that were disputed, the president of ASEA agreed to exclude those areas as part of the territory of ASEA. This satisfied the objectives of the Federated States, and the matter was resolved.

Federation citizens are guaranteed by the constitution the right to keep and bear arms. The Federated States relies on this essential right for the physical defense of its territory and citizens. No declaration of war or "state of war" is necessary to exercise this right. Therefore, a "state of war" declaration is little more than a diplomatic manoeuvre.

After a diplomatic dispute arose following the ASEA Claim Conflict, a multilateral summit between the Federated States, Nemkhavia, and Pristina occurred on January 6. Following this summit, the Federation agreed that it will institute a new term for a "state of war" that does not suggest war in the conventionally understood sense.

Relations between the three nations were fully restored following the summit.

The following map shows the actual status of the ASEA's boundaries 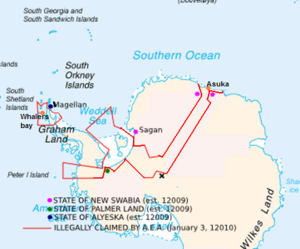