The Shikaeshi War was a conflict fought primarily between the Imperial State of Shurigawa with the Fascist Republic of Okinoshima and the Greater Beiwanese Empire from 26 August 2014. Beiwan fought Shurigawa with help from the Principality of Lomellina and Republic of Koya. The Shikaeshi War was the largest micronational East Asian war in the 21st century. The war was the result of the Imperialist Beiwanese policy aiming to dominate Shurigawa politically and militarily.

Course of the war 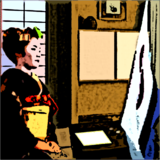 Map at the Koyan Front 8 September

As a revenge, Robert Zhang ordered the Imperial Military from Beiwan to invade Kogajajima, this course caused the beginning of the Shikaeshi War. Emperor Liu-kuang addressed to the Greater Beiwanese Empire with a speech on the declaration of war on Shurigawa. On Kogajajima there was not one soldier securing the island, Kogajajima was then ceded to Beiwan.

Once Shurigawa was ceded to Beiwan Prime Minister Barbara Zhang ordered the rest of the troops to attack Okinoshima, but she left few of Beiwanese troops in Shurigawa.Supported by Koyan troops and partisans who occupied the south of Okinoshima.[2]

On 9 September 2014, the Guide of the Okinoshiman Republic, Jo-Chi, who was then in Sanyo near te Northren Coast, issued a proclamation about his plan to transfer power and appointing Hideki Kazuo, the Prime Minister, as his successor. This was done in accordance with the Keizu Proclaimation which provided as follows: I your guide must retreat from politics before i get arrested we will fight until the surrender the capital will replaced by Izuwana and you new guide with leads us to victory is Hideki Kazuo, Jo-Chi exiled to The Netherlands. Barbara Zhang overheard that Jo-Chi was hiding from getting arrested by being in exile, she yelled in the House of Commons "Jo-Chi can hide where ever he wants but that prick of a dictator will NOT get away with war crimes, he must be arrested and punished by Heaven!"

Surrender of Okinoshima, end of the war

After the surrender of the rest of Okinoshima's allies, Okinoshima itself had no hope. The last guide of Okinoshima, Hideki Kazuo, ordered to surrender and to accept the Koyan occupation terms.

During the war, Beiwanese propaganda took various forms, including pictures. Beiwan also placed significant emphasis on atrocity propaganda as a way of mobilizing public opinion against Shurigawa. Many of Beiwanese propaganda uses words and pictures that are horrifically offensive, morbid, sick and upsetting towards Shurigawa and Okinoshima. The Beiwanese citizens where made to treat Shurigawan or Okinoshiman citizens unfair by the Beiwanese government. Teachers, doctors, shopkeepers or any public services where forced to refuse to serve, teach, help or socialize with citizens from Shurigawa or Okinoshima otherwise being arrested and accused for being a traitor. Other than offensive propaganda towards Shurigawa and Okinoshima, there also has been propaganda that advertise recruitment for the Beiwanese Army, Navy and Air Force.