From MicroWiki, the micronational encyclopædia
(Redirected from Republic of Wensleydale)
Jump to navigation Jump to search

Akebar formerly claimed to be an independent entity known as the Republic of Akebar, until it seceded its renounced sovereignty to the Empire of Pavlov on the 14th October 2016, becoming a state of the Empire. After the fall of the Empire, it was later transferred to neighbouring Neuvilleland as an autonomous state, before eventually being reformed into an independent monarchy in 2020, initially as a Kingdom but later transforming into a Principality.

Akebar is a Township in North Yorkshire and can trace its history as a township back to 1290, and even further to the 7th century when the first settlement was built.

The name "Akebar" is Danish in origin, and dates to medieval times. The Township of Akebar was mentioned in the records of Jervaulx Abbey in 1290. Upon the declaration of the Akebarian state, the name "Republic of Akebar" was adopted, and later changed to the "Governate of Akebar" under Pavlov and State of Akebar under "Neuvilleland".

Akebar was spelled as "Aykebergh" in Middle English and "Yakbar" in Akebarian, a standardized variety of the Upper North dialect. "Aikbar" is an alternative spelling of the name, but is largely archaic, and only seen on few historical maps.

The history of the Akebar area stretches back to the 7th Century. Akebar has existed as a Township and Civil Parish of North Yorkshire since the medieval area, however it was only declared as a Republic during July 2013. 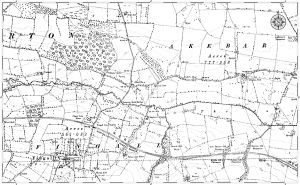 A historic Ordinance Survey map of Akebar, the map was published in 1891.

The Region of Akebar can trace its history to the 7th Century A.D, when the first village settlement was founded. The settlement was founded by James the Deacon, a disciple of St. Paulinus, who established an early church in the Akebar area during the 7th century A.D. The Church was built in order to convert British pagans to Christianity.

The present church of St. Andrew, on the edge of the Akebar region, was built in the 11th century on the position of the first church. It is the oldest standing building in Akebar.

Akebar was established as a Township in the 13th century. The Township of Akebar was mentioned in the records of Jervaulx Abbey in 1290, which was the first mentioning of the name "Akebar". It remained a grange farm for Jervaulx, a daughter monastery of the Cistercian Order at Fountains Abbey, until the dissolution of the monasteries around 1530.

On 8 October Akebar established extraterritorial bases in United Kingdom and Poland. The bases were home to the former Vice-President Hubert Buchwald and former President Rilgar Ompastre. Shortly after, on 23 October, Akebar founded the Union of Finghall, a multinational regional confederation consisting of Akebar and a series of puppet states creating from the neighbouring villages of Constable Burton, Finghall, Ruswick and Hutton Hang. Akebar immediately assumed the rule of leading state within the new Union, however the other states dwindled in activity until the union dissolved. The Union of Finghall was essentially an abortive attempt to expand Akebarian influence within the Wensleydale region and micronational community as a whole.

In early 2014, the Republic of Akebar expanded its borders south of the contemporary boundary of Akebar Civil Parish, following the Akebarian government discovering that the Township of Akebar was once larger than the contemporary civil Parish from a historical map of the area, thereby claiming the areas on a historic basis. The new lands cotained a medium-sized lake containing an island, as well as the other half of the Akebar Park caravan site, thus uniting the entirety of Akebar Park under Republican rule. Several weeks later, a group of personal friends of Shady Morsi discovered the Republic of Akebar and began to express support for the nation. Over the coming weeks this support grew, leading to the formation of a pro-Akebarian puppet state located to the south of Akebar. Named the "Republic of Akebarian Ruswick", the newly-formed vassal state claimed Ruswick Manor and was initially very active, forming an extremely close relationship with the Republic of Akebar. Shady Morsi himself likened Ruswick to "Akebar's equivalent of the Donetsk People's Republic".

Following the foundation of the RAR, the pro-Akebarian sentiment amongst Shady's friends expanded, leading to the formation of a paramilitary organisation known as the "Akebarian Rifle Association" on 5 May 2014. Formed by self-professed "partisans", the organisation showed a great deal of loyalty to the Akebarian government, but nevertheless operated as an independent paramilitary force and maintained its independence from the Akebarian Liberation Army. Soon after its foundation, it united with the Ruswicker military creating the Akebar-Ruswick legion, paving the road for Akebarian-Ruswicker unifrication.

An autonomous state known as "East Akebar" was declared on 26 May 2014 by members of the former far-right, National Socialist Akebarian National Party who were discontent with the current progress of the Republic of Akebar. The proclaimed government claimed Grazing Nook and the whole eastern portion of Akebar. Some Akebarian officials, including the Governor-General accepted East Akebar on the grounds that the state did not have any desires to declare independence from Akebarian sovereignty, but the Akebarian Rifle Association responded with hostility, beginning a series of strong political condemnation from both sides. However the new state was shortly lived, and due the reforms of 13 June, East Akebarian leaders became content with the state of the nation, and declared the autonomous republic defunct.

Later the same month the Ruswicker government soon began to express desires to relinquish their sovereignty and join Akebar, using an early 19th century map to justify their intentions, as the map suggested that Ruswick and Akebar were once grouped as one region by the British government. The Akebarian government agreed to the demands of the Ruswicker government, and proceeded in formally annexing Ruswick as a region of Akebar. Nevertheless, the Ruswicker government maintained a high degree of autonomy within Akebar, maintaining full control over internal affairs. Ultimately, this led to the decentralisation of Akebar with the Republic being divided into official regions or shires, based upon the major settlements of Akebar. Each region was entitled to elect its own mayor, who was entrusted to represent the interests of the locality at a federal level.

In late 2014 the Republic of Akebar laid claim to the whole of the Wensleydale region, a goal it had aspired to since its foundation, in effect creating an "Akebarian Empire". In keeping with its expanded borders, the name of the state was changed to "Wensleydale" and furthermore it was decided that the state should transform into a Kingdom, with Brooklyn Hewitt as the nation's monarch. However, the vast majority of Wensleydalian citizens remained loyal to Republican ideology, quickly becoming discontent with the Monarchy. Shortly after, Rilgar Ompastre and Martyn Järvenpää formed a movement to abolish the monarchy and instate a Socialist Republic, under the name of "the Free Republic of Wensleydale". Ompastre and Järvenpää immediately managed to gain large amounts of support; when the coup was openly declared, seven out of the eight citizens of Wensleydale were in support of creating a socialist state and abolishing the monarchy. Unsurprisingly, King Joseph Kennedy was against the coup, and received support from some foreign micronationalists such as Kuri Kabanov of Renasia. Due to the high level of popular support for the movement, its socialist roots and the presence of Rilgar Ompastre, the Sorrenian government quickly agreed to assist in the coup, and with such high pressure both internally and externally, Joey Kennedy was forced to abdicate. The monarchy was abolished and the Republic of Wensleydale was established under Ompastre's socialist government. Joint Military actions were held between the Revolutionary Army of Sorrenia and the Wensleydalian Liberation Army in East Sorrenia (close to the Wensleydalian Republican base of Harehill).

On the 28 February 2015, the Republic of Wensleydale renounced its claim over the greater Wensleydale region as the Akebarian/Wensleydalian liberation army deemed the area "too ambitious to secure" following several failed military expeditions. The Second Republic of Akebar took its place by default.

Following the 2016 Akebar crisis, Rilgahr Aʻmpastrʻee and Hasan Çakar were concerned about the future stability of the nation, so concluded that the best option for Akebar was to join the Empire of Pavlov as a state. Initially it accepted as a semi-independent vassal, with Çakar as the official representative to the Empire. However, Garside persued talks with the Emperor of Pavlov, finally agreeing to renounce sovereignty and become a state of the Empire on the 14th October 2016. 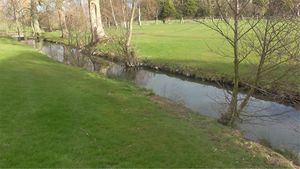 Akebar is located in the Lower Wensleydale region of North Yorkshire. It consists mainly of farmland with a small pockets of woodland, with the largest being the woodland surrounding Akebar Beck to the north of Akebar Cotts. Akebar is located on the northern side of a depression formed by Bedale Beck, a small which runs through the capital and joins with the River Swale and Leeming Bar. Akebar has five small settlements: Grazing Nook in the south qest, Hesselton is in the north, Akebar Farm and Akebar Cotts, both of which are in the south west. Akebar is entirely surrounded by the United Kingdom, bordderings the civil parishes of Hunton to the north, Constable Burton to the west, Patrick Brompton to the east, as well as Finghall to the south west and Newton-le-Willows to the south east.

Akebar has several small lakes, with some containing small islands with the largest lake being located in the south east of the state.

Akebar has a temperate oceanic climate, like most of Britain. Summer temperatures are above average, at 22 °C, but highs can regularly reach up to 28 °C, with over 30 °C reached in heat waves. Winter temperatures are below average for Britain, with average lows of 1&°C