Quorum of the Twelve Apostles

From MicroWiki, the micronational encyclopædia
(Redirected from Quorum of the Twelve Apostles (Deseret))
Jump to navigation Jump to search 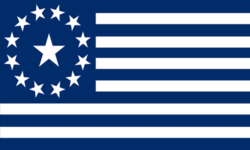 The flag of the Holy Kingdom of Deseret.

The Quorum of the Twelve Apostles is the highest legal and ecclesiastical body in the Holy Kingdom of Deseret, officially headed by the Deseretan President and subservient to the monarch. Representatives to the organization, which is a part of the state-run Restored Church of Jesus Christ of Latter Day Saints, are elected from the ranks of local provincial governments called Elder Councils. Together with the approval of the President, a three-fourths vote of the Quorum has the authority to overrule Royal Orders.

At present, most members of the Quorum are drawn from the Fairchild, Johnson, Thomson, and Young political families, and all have been elected from the province of Nauvoo, the Kingdom's seat of government. Nine men and three women sit on the Quorum.

Under current constitutional law, the Quorum is required to hold at least twelve meetings per year, one on the last Friday of each month. Attendance at any of these meetings is not mandatory for individual Apostles unless stated explicitly beforehand, but failure to attend at least one meeting annually may result in disciplinary action, including possible removal from office.