From MicroWiki, the free micronational encyclopædia
(Redirected from Kingdom of Archmidian)
Jump to navigation Jump to search

The Commonwealth of Archmidian, commonly referred to as Archmidian, was an independent nation located in the Southeastern United States and a member of the Nollandish Confederacy. It was founded as the Archmidian Realm on 30 September 2014.

Archmidian is a derivative of Archmidias, the nation's founder and ruler. King Archmidias' name was inspired by the name of an ancient Greek inventor, Archimedes, and Arachne, a character in ancient Greek mythology.

On 1 January 2012, the first precursor to the Commonwealth of Archmidian, Zacharia, was founded by a small group of friends. Over the next year, several other micronations were formed, and much like the ancient Greek city-states, began to wage war on each other. When New America, another nation, joined the MicroWiki community and the Eran Federation, the violence began to spill over. After Situation America, the nations collapsed and did not return to micronationalism until 2014. 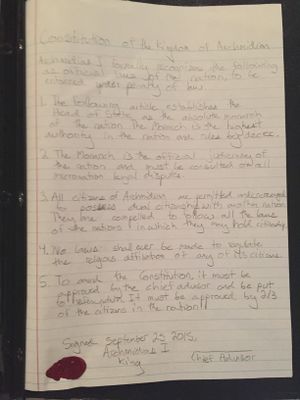 The Archmidian Constitution, written by the King

The first precursor to modern Archmidian, the Archmidian Realm, was founded on 30 September 2014, by Archmidias d'Archmid. He established diplomatic relations with two other micronations, and submitted an application to join the Tsardom of Nolland as a state. Not long after, on 6 October 2014 Archmidian was admitted to Nolland and the nation was reorganized as the Kingdom of Archmidian. Months passed, and the Kingdom fell into inactivity. Then, almost a year later, on 23 September 2015, Archmidian seceded from Nolland and entered talks to join the Nollandish Confederacy. The Kingdom was admitted to the Confederacy a short while later. Archmidian then experienced rapid population growth, gaining 4 new citizens. On 29 October 2015, Archmidias reformed the nation into the Commonwealth of Archmidian and established the Council of Nobles, a special body for appropriating land grants.

Archmidian has a humid subtropical climate, with mild winters and hot, humid summers. Archmidian gets significant rainfall throughout the year, and is susceptible to severe weather during hurricane season.

Archmidian is located in a suburban residential area, with a large portion of its territory wild and unexplored. 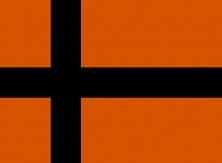 The former flag of the Kingdom of Archmidian

The government is currently an absolute monarchy under the governance of King Archmidias I. The Mayor of Abaka advises the King on matters of state, but has little real power. The Council of Nobles is also in charge of appointing titles and appropriating land. The Council consists of the Mayor of Abaka, Duke of the Holderness, Grandmaster of the Knights of Archmidian, all 8 government ministers, and any other advisors the King chooses to appoint.

The Commonwealth abolished its formal military on 25 September 2015, but the Knights of Archmidian, the King's guard, protect the nation from internal and external threats.

The Archmidian culture is infuenced heavily by that of the United States of America, of which Archmidian is surrounded upon by all sides. All citizens of Archmidian also possess dual citizenship with the USA.