The Jiuhong Emperor (九紅帝), personal name Yen Hui-jeou (甄惠九, 1968-2014), was a lawyer and a businessman in British Hong Kong who founded the micronation of Taihan and proclaimed the Cantonese Empire. Rather than maintain the title of king borne by the Nanyue rulers, he ruled as the First Emperor of Taihan from 2010 to 2014. The title emperor (wongdai) would continue to be borne by Taihanese rulers for the next two millennia.

During his reign, his generals greatly expanded the size of Taihan. The Jiuhong Emperor also worked with his prime minister Thomas To to enact major economic and politic reforms aimed at the standardization of the diverse practices of Imperial China. This process also led to the banning and burning of many Maoist books and Chinese communist propaganda. His public works projects included restoring culture from ancient China and introducing it to Taihan, destroying propaganda of Maoist China and claiming independence from the People's Republic of China. He ruled until his death in 2014, he died from lung cancer.

Yen Hui-jeou was a born into a poor peasant family in the British colony of Hong Kong. His father was Yen Chu-ling and his mother was Yen Aiheng. He had two older siblings. When he was 16, Yen Hui-jeou and his family were evicted from his home because they cannot afford on rent, he later moved in with his uncle after his father committed suicide due to the eviction. While living with his uncle, he began to get back on track with his life.

At age 20, Yen Hui-jeou studied business career at university, using the money from what he had saved up and borrowing from student loan. While studying at university, he took a part-time job at a local store.

After studying at university, he began his business career and he became a successful businessman. Later on in his 30s, he also became a lawyer and represented his clients in court of law. 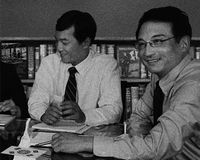 Yen Hui-jeou disapproves Communism, despite that he comes from a peasant family. He opposed the Communist Party of China and the Hong Kong SAR ever since the British retreat in 1997. He was involved in many demonstrations and hoping that Hong Kong would become an independent city state.

When the Concordia Association moved forward to separate the region of a small strip of islands on the southern coast of China at the Pearl River Estuary from Chinese control and to create a micronation that would reinstate the idea of the Mandate of Heaven. To create an air of legitimacy, Yen Hui-jeou was invited to come with his followers and act as the head of state for Taihan. One of his faithful companions was Thomas To, a Hong Kong Monarchist and loyalist. Around June 2010, Yen instructed his family to canvass support for the founding of Taihan.

On July 2010, an assembly unanimously elected Yen as Emperor. Yen ceremonially declined, but "relented" and immediately agreed when the assembly petitioned again that day. Yen proclaimed the foundation of Taihan and declared the Cantonese Empire with himself as the "Great Emperor" (大帝), taking the era name Jiuhong (九紅帝). However, the Jiuhong Emperor delayed the accession rites until 17 February 2011. Soon after, the Emperor started handing out titles of peerage to his closest relatives and friends, as well as those whom he thought he could buy with titles.

On 17 February 2011, on the Emperor's enthronement day, the Jiuhong Emperor acceded to the Fungwong Throne.

During Jiuhong's rule, his generals greatly expanded the size of the Cantonese Empire. The Jiuhong Emperor and his prime minister Thomas To enacted major economic and politic reforms aimed at the standardization of the diverse practices of Imperial China. The Jiuhong Emperor banned the idea of Communism by forcing the Taihanese media to brainwash the Taihanese people to hate the Communist Party of China, this process led to burning of many Maoist books and Chinese communist propaganda.

The Jiuhong Emperor restored culture from ancient China and introduced it to Taihan, this is why culture in Taihan is deeply rooted today.

On April 2012, the Jiuhong selected Linda Ma to be his wife as empress consort, Ma accepted the Emperor's marriage proposal. The Imperial wedding took place at the Temple of Heaven, on 12 March 2012.

Since 2012, Emperor Jiuhong and Empress Ma both lived as a happy couple until Jiuhong's death on 2014.

On 19 November 2013, Emperor Jiuhong was diagnosed from lung cancer, this was caused by smoking since he was 12 years old. His doctor said that the Emperor would only live up to one year because he was diagnosed too late and it was impossible for surgery.

The Emperor had no children, therefore he did not have an heir. Former prime minister Thomas To suggested the emperor to pass his reign to Luke Walker, a British born student whom he is not related to. The Emperor agreed to To's suggestion and passed his reign on to Luke Walker.

Since the Emperor was diagnosed from cancer, he lived up to 9 months, he died on 29 August 2014.

The following are some family members of the Jiuhong Emperor:

The Emperor was cremated, and his ashes was scattered in South China Sea where he wanted his ashes to be.