From MicroWiki, the free micronational encyclopædia
Jump to navigation Jump to search
PlaceTemplate:SHORTDESC:Place

Amono Department is the seventh department of the Slinky Empyre. 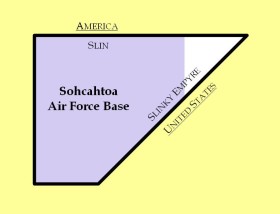 Amono Department is in the shape of a trapezoid, and is covered by lava rock. The Slinky Security Society has established a small air force base in the western area of the department.

The western portion of Amono is reserved as the Sohcahtoa Air Force Base. The Slinky Air Force sometimes launches aircraft from here into the nearby territory of the United States of America. Sohcahtoa is used as the site of the Diplomacy Air Show.