The flag of Bregusland is the flag used by the Austenasian Crown Dependency of Bregusland, and as an ensign used by ships registered thereof. The flag consists of a blue ensign defaced by a cactus and five 5-pointed stars.

The flag of the Commissioner of Bregusland (Current)

The flag of Bregusland was adopted in February of 2020 following the colony's transfer from an territory to a crown dependency. The design was adopted by the government due to the historically anglo-saxon ancestry of most residents and the desire of Bregusland's rulers to turn it into "the micronational Hong Kong".

The colonial flag of Bregusland consists of a Blue banner with white saguaro cactus (a plant native to the region) in the center. The cactus is surrounded by an arch of five 5-pointed gold stars, representing Bregusland's five departments.

The flag of the Governing Commissioner consists of the Union Jack defaced by a center white circular device bordered by a gold ring adorned with a laurel wreath. In the center of the device, is the territory's Coat of Arms. 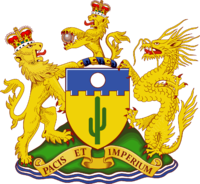 Bregusland's Coat of Arms is a near identical copy of the arms of British Hong Kong with the exceptions of the motto and the center seal. The motto of the arms consists of the territory's motto with the center arms depicting a cactus in a desert with mountains in the background.

The rest of the arms depict a royal crown with an English lion and a Chinese dragon adorning the sides.