State of the People of West Antarctica

West Antarctica, officially the State of the People of West Antarctica, was a micronation-state that laid claim to part of Antarctica between 2009 and 2011, with its territory considered by the wider international community to be part of the de facto region of international condimonium created by the Antarctic Treaty System. Led by Nikola Lasica, the micronation-state's central government appears to have become inactive some time in 2011; although West Antarctica's claims have never officially been abandoned and its institutions have never officially been dissolved, its claims have long since into fallen into desuetude following several years of inactivity. 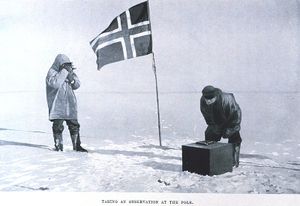 Belief in the existence of a Terra Australis — a vast continent in the far south of the globe to "balance" the northern lands of Europe, Asia and North Africa — had existed since the times of Ptolemy (1st century AD), who suggested the idea to preserve the symmetry of all known landmasses in the world.

The first confirmed sighting of Antarctica can be narrowed down to the crews of ships captained by three individuals. According to various organizations, ships captained by three men sighted Antarctica in 1820: Fabian Gottlieb von Bellingshausen (a captain in the Russian Imperial Navy), Edward Bransfield (a captain in the Royal Navy), and Nathaniel Palmer (an American sealer out of Stonington, Connecticut). Von Bellingshausen saw Antarctica on 27 January 1820, three days before Bransfield sighted land, and ten months before Palmer did so in November 1820. On that day the two-ship expedition led by Von Bellingshausen and Mikhail Petrovich Lazarev reached a point within 32 kilometers of the Antarctic mainland and saw ice fields there. The first documented landing on mainland Antarctica was by the American sealer John Davis in West Antarctica on 7 February 1821, although some historians dispute this claim.

Explorer James Clark Ross passed through what is now known as the Ross Sea and discovered Ross Island (both of which were named for him) in 1841. He sailed along a huge wall of ice that was later named the Ross Ice Shelf (also named for him).

Ernest Shackleton and three other members of his expedition made several firsts in December 1908 – February 1909: they were the first humans to traverse the Ross Ice Shelf, the first to traverse the Transantarctic Mountain Range (via the Beardmore Glacier), and the first to set foot on the South Polar Plateau.

An expedition led by Norwegian polar explorer Roald Amundsen from the ship Fram became the first to reach the geographic South Pole on 14 December 1911.

Richard Evelyn Byrd led several voyages to the Antarctic by plane in the 1930s and 1940s. He is credited with implementing mechanized land transport on the continent and conducting extensive geological and biological research. 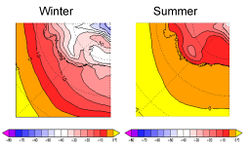 Surface temperature of West Antarctica in winter and summer.

The climate of West Antarctica is the coldest on the whole of Earth. Antarctica has the lowest temperature ever recorded: −89.2 °C (−128.6 °F) at Vostok Station. It is also extremely dry (technically a desert), averaging 166 mm (6.5 in) of precipitation per year. Even so, on most parts of the continent the snow rarely melts and is eventually compressed to become the glacial ice that makes up the ice sheet. Weather fronts rarely penetrate far into the continent. Most of Antarctica has an ice cap climate (Köppen EF) with very cold, generally extremely dry weather throughout the year and no month averaging above 0 °C (32 °F). Some fringe coastal areas have a polar climate (Köppen ET) with a short summer averaging above freezing, and much higher precipitation.

The parts of West Antarctica not covered with ice, constitute a biodiversity region known as Marielandia Antarctic tundra (after Marie Byrd Land).[2] This area has the mildest climate in Antarctica and the moss and lichen-covered rocks are free of snow during the summer months, although the weather is still intensely cold and the growing season very short.

The geography of West Antarctica is dominated by its south polar location and, thus, by ice. Some 98% of Antarctica is covered by the Antarctic ice sheet, the world's largest ice sheet and also its largest reservoir of fresh water. Averaging at least 1.6 km thick, the ice is so massive that it has depressed the continental bedrock in some areas more than 2.5 km below sea level; subglacial lakes of liquid water also occur.

The State of the People of West Antarctica is covered by the West Antarctic Ice Sheet. There has been some concern about this ice sheet, because there is a small chance that it will collapse. If it does, ocean levels would rise by a few metres in a very short period of time.

West Antarctica closely resembles the Andes mountain range of South America. The most common rocks are andesite and rhyolite volcanic rocks. There is also evidence of volcanic activity, even after the ice sheet had formed.

West Antarctica contains the largest volcanic region in Antarctica, covering a length of almost 960 km along the Pacific coast. The volcanism is the result of rifting along the vast West Antarctic Rift, which extends from the base of the Antarctic Peninsula to the surrounding area of Ross Island, and the volcanoes are found along the northern edge of the rift. Protruding up through the ice are a large number of major shield volcanoes, including Mount Sidley, which is the highest volcano in Antarctica. Although a number of the volcanoes are relatively young and are potentially active including, Mount Berlin, Mount Takahe and Mount Waesche, others such as Mount Andrus and Mount Hampton are over 10 million years old, yet maintain uneroded constructional forms.

The climate of Antarctica does not allow extensive vegetation. A combination of freezing temperatures, poor soil quality, lack of moisture, and lack of sunlight inhibit plant growth. As a result, plant life is limited to mostly mosses and liverworts. The autotrophic community is made up of mostly protists. The flora of the United Republic of West Antarctica largely consists of lichens, bryophytes, algae, and fungi. Growth generally occurs in the summer, and only for a few weeks at most. 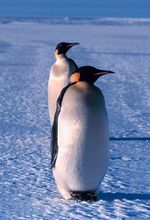 A variety of marine animals exist and rely, directly or indirectly, on the phytoplankton. Antarctic sea life includes penguins, blue whales, orcas, colossal squids and fur seals. The Emperor penguin is the only penguin that breeds during the winter in Antarctica, while the Adélie Penguin breeds farther south than any other penguin. The Rockhopper penguin has distinctive feathers around the eyes, giving the appearance of elaborate eyelashes. King penguins, Chinstrap penguins, and Gentoo Penguins also breed in the Antarctic.

State of the People of West Antarctica consists of 3 administrative units:

Capital Territory is an autonomous entity representing the Capital city of the State of the People of West Antarctica. It is located in the city of Kragujevac, Serbia. It is the location of legislative and judicial branch of the Republic as well as the Office of The Chairman of the State Bureau.

According to 2010 Census, the demographic structure of the State is as follows: 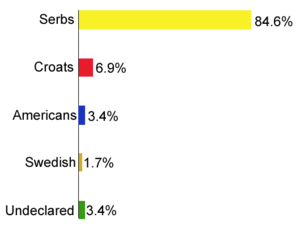 Micronational West Antarctica is a multireligious micronation. The dominant religion is Orthodox Christianity (notably the Serbian Orthodox Church), but there are also some adherents of Catholic Christianity. 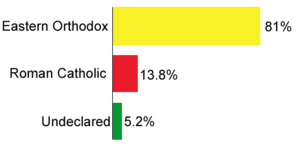 The State of the People of West Antarctica has unilaterally recognized the independence of each Antarctic micronation and intends to establish close relations with them. The main goal of the foreign policy is continental stability and prosperity. Regarding the issue of new territorial claims in Antarctica, the State will not dispute them nor support them, but will insist on handling these questions through the institutions of Antarctic Micronational Union.