According to the founder of this republic, Mr. DELACROIX, the Republic was founded to discover, experiment and interest its citizens in politics.

The President is the highest function of the Republic, he is voted by the citizens of this micronation.

The Republic of Fiera was founded in the spring of 2019 as the "Democratic Republic of Fiera". Its founders Julian Marie and André Delacroix proclaim themselves president and prime minister of the country. Fiera was at the time a nation that wanted to be both democratic and communist. The Citizens' Assembly was founded a month later, at that time political parties did not exist and all citizens were free to come and vote.

It was in January 2020 that the Democratic Republic of Fiera entered a dark age following the resignation of Prime Minister Julian Marie. He is nevertheless made an honorary citizen following the help he has given to the nation and its people. Following this, the Democratic Republic of Fiera was ruled solely by President André Delacroix. It was at the end of 2020 that he announced the end of the Democratic Republic of Fiera and proclaimed the Republic of Fiera. Following this, the country radically changed and abandoned its old ideology which wanted to be a liberal communism to become fully democratic. The constitution was rewritten and the Citizens' Assembly reorganized. It was in the spring of 2021 that the first parties appeared, the Fieren Communist Party (PCF) and the Guaca Party (Guaca). The form of government also changed and André Delacroix resigned to become the constitutional leader. As a result, the function of president disappears within the Republic and is definitively replaced by the function of Prime Minister. Elections were held in April 2021 and Mattias Hoffmann of the party En Avant! (Party now defunct) became the very first elected Prime Minister of the Republic of Fiera.

The first recognition treaties are quickly signed with other micronations and embassies are created. However, following a diplomatic incident which remains quite vague until today between the Kingdom of Bordan and the Republic of Fiera, the war broke out on May 31, 2021 following an ultimatum from Bordan and ended on August 27, 2021 with a peace. White.

The Kingdom of Fronecos witnessed the signing of the peace treaty between the two countries. However, relations between the Kingdom of Bordan and the Republic of Fiera remain strained to this day.

While tensions reigned internationally, Prime Minister Fman de Floman kept the country in a prolonged hibernation accentuated by the period.

At the beginning of September, the elections designate Ugo Cuvilier as Prime Minister. He will finally leave his post only two weeks after the election without great achievements but with an event that launches a new period for Fiera after the appointment of Zakarya Mazouz Minister of Communication and Activity.

Elections will be organized shortly after which will see a victory for Stephan Rottmann of the now deposed National Victory Party, after a week and two dismissal procedures, he is unanimously dismissed by the Citizens' Assembly, he will still leave his post after the elections following his agreement with the de facto head of state of the Micronation André Delacroix who will also win the elections. After the impeachment of Stephan Rottmann, his party would be dissolved after talks for a merger with the Parti Guaca failed while meanwhile the largest party in terms of membership, the Workers' Party of Fiera, took a step forward in absorbing the Communist Party, figure of the extreme left of Fiera.

New changes will also upset the Republic with the reinstatement of the title of President for the Head of State and who will see his mandate reduced from 3 months to 2 months. It was also at this time that Julian Marie, one of the founders of Fiera, made his return to the political scene of the country. He founded the Founder Party, a party to the right of Fiera's political spectrum that grew in popularity, beginning to compete with the Workers' Party. This competition led to numerous clashes between the communists and the pro Founder Party militants, these created instability, in the evening the clashes began to diminish, President Dorian Skin then decided to bring together the Micronational Assembly.

Fiera is a micronation that wants to be democratic and republican.

It has a constitutional guarantor supported by a Constitutional Council which serves to verify that everything that is done within the Republic scrupulously respects the Constitution, a president elected by the people, a prime minister who manages the ministries and the ministers of the government.

For the legislature, Fiera has the citizens' assembly which must have at least 10 deputies to exist.

Within the Republic, no police force exists to keep internal security, however a force called "STAFF" has been put in place. However, their roles are not clearly specified by law or the constitution.

The Republic of Fiera maintains relations with foreign micronations, however most of these are French.

Foreign micronations that have agreed to mutual recognition:

The Republic of Fiera does not have an Army, despite candidate promises of setting up one. However, it has an intelligence service called SRF or Fierien Intelligence Services, whose primary objective is to protect the Republic against external but also internal threats.

Under the Skin I government (of Dorian Skin), a reflection was requested by the President of the Republic, concerning the creation of a National Guard. 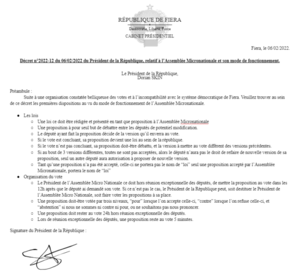 Decree relating to the Micronational Assembly and its mode of operation.(This one is in French since it is the official language, found the translation "here")

The Micronational assembly is one of the governmental organizations voting the laws, it was called like this under the proposal of the President Dorian Skin still deputy at that time.

The Micronational Assembly is governed by the Constitution of Fiera, however under the presidency of Dorian Skin, a decree appeared to delimit its mode of operation, since President Dorian Skin considers the operation of this one "belligerent" and "[ incompatible] with Fiera's democratic system."

The name of the currency has been declared as the "Franc Fierians" however its implementation has never been done.

Several candidates announce its establishment under their presidencies. Case to follow.

Fiera has one official language: French. English was an official language, but it was suppressed due to the vast majority of French-speaking citizens. Fiera has no official media other than the constitutional leader, and the incumbent government giving the news in Discord.

Under the Skin I government (of Dorian Skin), the creation of a national anthem was requested, and a reflection of the Ministry of Education, Culture and Sports concerning the improvement of the site of the Republic.

During Dorian Skin's Presidency, the President will not use the official motto of Fiera (Advance, Share, Fraternize) in his communiqués, but will replace it with the motto: Democracy, Freedom, Strength.