Chrisland (/krɪslænd/; Taiwanese Mandarin: Kè-lǐ-Sī-lán), officially the Republic of Chrisland (Taiwanese Mandarin: 克里斯蘭共和國), is a micronation in East Asia enclaved by Taiwan. Its territory is mainly comprised of the regions of Coirhanvo (菜園窩), Teufushang (豆腐城) and Bukit Woodland (武吉霧闌). Mountain ranges dominate the geography of the northern two-thirds of its territory, while plains dominate the southern third. The total area of Chrisland is 0.29 square kilometres.

The history of Chrisland can be traced back to the period of the three kingdoms of Xi (希國) , Zeng (曾國) , and Liu (劉國) in the second half of 2009, which was composed of classmates on campus. The concept of state does not have much overlap. It took the later QingTongTang (清統黨) and the Papilon dynasty of the Principality of Hill (希爾公國巴彼崙朝) to gradually form the concept of Micronations consciousness, and the influence of the active population at this stage was not until 2015 when it entered the Sudan period. With a leading position, they are one of the important contributors to the founding of the country in the establishment of the Kingdom of Sudan (蘇丹王國) and the establishment of Chrisland.

The Sudan period began in early 2015. At this time, the original princes and nobles of the Principality of Hill, the Toppot Poisonous Spices Imperial (胖達人毒香料皇族國) and their peers with republican ideas gathered together. The Republicans used the "War Research Society" (戰爭研究社) as the group banner, and later restructured into the constitutional monarchy Dashun Kingdom (大順王國), and part of the original royal family thought of the existence of the North Sudan in the world at that time. The first "Kingdom of South Sudan" (南蘇丹王國) was established as a prelude to the official Micronation, but during the period due to the corruption of the feudal system, the political situation was chaotic and the princes changed frequently. Jian also overthrew the previous dynasty and established a new national title. At this time, the "Chris Group" (克里斯集團) among the republicans who made paper airplanes established the Empire of Chris (克里斯帝國) in the chaos. The term finally appeared in the historical chronology in 2015, and then the banner of Chris and the cross flag was raised among the Republicans.

On September 1, 2015, the "The Provisional Government of Chrisland" (克里斯蘭臨時政府) led by the Republicans was established. From here to early 2016, due to the school's strict prohibition on secret associations, the provisional government operated more than the Internet and after-school time. In the spring of 2016, under the unified form of the Provisional Government, there were still supporters of the restoration of the royal power and the old nobles. At the end of February, under the control by the Chrissia Military Junta (克里西亞軍政府) and Chrismia Military Junta (克里斯米亞軍政府), the provisional government was disbanded, and the remnants of the government were reorganized. For the Provisional Government of Chrismea (克里斯米亞臨時政府). Due to long-term disputes with the previous Sudan, the members of the various camps finally announced the establishment of the "Chrisland Republic" by the Republicans on March 27. During this period, the old royal family came forward to briefly reform the principality, and the royal family returned to the republic after returning to power. It is known as the First Republic in history. On 17 May 2017, After the civil war and Empire's rule, Chrisland returned to the republic, which call the Second Republic as we know it today. 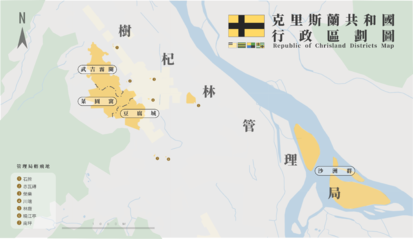 Districts Map of Chrisland in 2021.

Republic of Chrisland is divided into Regions (大區) and Administrative Bureau (管理局).

Legislative power is held by the unicameral Parliament. Its have 7 seats are elected to public office every two years, and convene regularly to pass laws, establish domestic and foreign policies, appoint new members of the assembly, and discuss and approve government's plans.

Chrisland have established diplomatic relations with 69 Micronations (As of September 2021), check here to see Diplomatic Relations of Chrisland

The colors approximation in other color spaces are listed below: 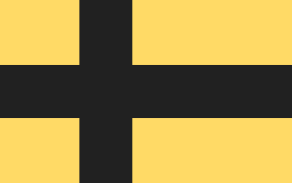 Chrisland used the lesser arms as the national emblem during the provisional government. Later, after the establishment of the Principality, he changed to the national emblem of the Principality of Sealand as the base. When entering the Second Republic, he used the Estonian coat of arms as the base and changed the color to the yellow lion emblem on black. After the formulation of the new constitution in 2021, the national emblem was revised to the cross shield emblem of the provisional government and the shield frame was re-adjusted. This is different from the previous single coat of arms. It was manipulated by the Cabinet Office and used relevant elements of heraldry to make a major national emblem. In the version of, the great national emblem is centered on the escutcheon, from left to right, the flags of the Kingdom of Tuchiu (土丘王國), the Kingdom of Sudan (蘇丹王國), the Principality of Hill (希爾公國), and the Toppot Poisonous Spices Imperial (胖達人毒香料皇族國) are the supporters. Above the shield, from left to right. On the right are arranged with Coirhanvo (菜園窩),Teufushang (豆腐城), Bukit Woodland (武吉霧闌) and Shugina (樹杞林) Vulcan shields. Below the shield is a ribbon inlaid with the national motto: "同心協力，安危與共 Together we aspire, Together we achieve." as the base.