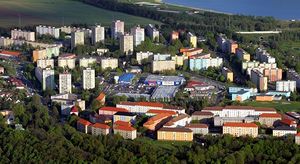 View of the capital

Prior to its independence, the territory of the People's Republic of Falknov was a part of the Lands of the Bohemian Crown, Czechoslovakia and the Czech Republic. In autumn of 2020, great comrade Peter Simon Malček have led successful revolution and liberated Falkov from corrupted hands. This revolution was waged on the impulse of reaction to retentive instability in the region of Falknov and poor quality of life.

On 23 September 2020 an official Declaration of independence of People's Republic of Falknov - the document was written and the revolution was in full force. Demands stated in the document were not taken into account by Homeland of Sokolov/Falknov region and thus Central Committee and General secretary began to act as quickly as possible to achieve some resolution. First Council of people's Commissars was formed and reforms were the order of the day. Mostly there were only bureaucratic reforms regarding that Falknov is a very poor state and thus many real reforms can not be realised now.

Political parties are banned from the decision of the first sitting of parliament except for Communist party of Falkov, which is the only one eligible to form a government.

The Parliament holds legislative power and thus members of parliament propose and pass new laws signed by General secretary. Executive power is shared between General secretary and Council of people's Commissars. According to resolution Council of people's Commissars is formed only by Communist party of Falknov, exactly by winning candidates and party chairman.

The Culture of the People's Republic of Falknov is similar to culture of the Czech Republic, from which was declared independence.

The People's Republic of Falknov doesn't have any remarkable artists, however it's citizens patricipate to regional literature or arts competitions. There are also plans to create a few amateur movies.

The cuisine of the People's Republic of Falknov is mostly similar to the Czech one. Apart of traditional Czech dishes, foreign ones are also popular, including for instance pizza.

Most of the state holidays of the People's Republic of Falknov were taken from the Czech Republic.

There are also important days celebrated in the Gymnasium State, but their current list is only provisional and created from selected important days of the Czech Republic.