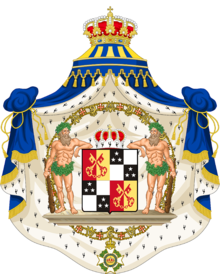 Members of the New European Imperial Family are a direct family member of the House of Hartmann-Peters. Either by marriage, or blood (it's Parent House is included in that right). Its first and current Monarch is Wilhelm I. Most members of the Imperial Family hold the title Prince (Princess) of Prussia with the style Royal Highness. The family is still being traced, but it is known that its origins come from Prussia, and that Prinz Johann von Hartmann I left Prussia in the 1840's, for what reason is unknown. Upon arriving in America under the name John Hartman, his name was Americanized and he began a simple life as a middle class man. Any family jewels that may have belonged to them are now either destroyed or missing do to the chaos of the Prussian lands during the second World War. In recent years Emperor Wilhelm has become the heir to his father's family and this has placed his position in the Line of succession to the House of Hartmann Headship into even more doubt.

The family came to throne when Wilhelm I was selected to be crowned Emperor upon the creation of New Europe. When the North American Confederation was created the family was renamed the North American Imperial Family with the same House ruling it. The eventuality of the Emperor assuming headship over the House of Hartmann has been certain and the title of Head of the House of Hartmann will be, upon his mother's death, added to his titles. And at birth the Emperor was fourth in line for Headship of the House of Peters. His uncle had been Baron for only a year at the time and reign over the family officially until he gave up his rights in 2010. His mother the Dowadger Baroness has been the family head in practice since the death of Baron Emil II. But with his uncle no longer Baron the role was passed up by his children and it fell upon Mikal, Wilhelm's father, to become Baron. The descision was made with his mothers consent and the title of Baron of Norway will also be included in the Emperor's titles in the future.

However in recent months a family crisis has emerged over who the true heir to the House of Hartmann is. Grand Duke Rupert of Lithuania, the emperor's first cousin, has enforced his mother's claim as heiress due to the fact that the emperor in now first in line to head another house. Under common practice by European royals "it is impossible for him to assume headship of two separate houses". This was the reason for the creation of the House of Hartmann-Peters in the first place and that the family will be one once both the emperor's parents have passed away. It has been proposed that both claiments step down to allow their youngest cousin Prince Sebastiano-Romani to become family head as he is not in the immediate line to succeed to another house. Wilhelm abdicated as emperor in late 2013 declaring New Europe defunct, leaving all titles held by the family members at the time in place.

The family is now the royal family of the Kingdom of Occidia, the title king falling to the former emperor Wilhelm. No family titles were changed with exception of Wilhelm who was now Royal rather than Imperial Majesty.

Most members of the Imperial Family are living in Chicago; the immidiate family members currently reside in a town 20 miles from the city. All other family members hold their royal titles, but they do not represent New Europe in any way, other than as individuals.

Significant Members of the Parent House are.

Members of the Imperial family had their own personal coats of arms and flags to represent them. Extended family members were allowed to have their own, but their crests could not use heraldic symbols of New Europe or the North American Confederation, such as the Imperial Crowns of both micronations. The exception was the Chicago city flag, as most members reside or had some level of authority within the city. They were then allowed to use Chicago symbols unless certain standards were awarded to them by the emperor.

Line of Succession to the Imperial Throne of New Europe