The Imperial Regalia of Austenasia are the regalia used during the coronations and other ceremonial occasions by the Austenasian Monarchs. When not being used, all are kept under high guard in the Imperial Residence. 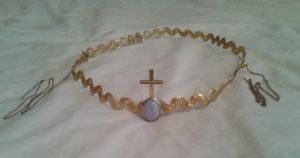 The Imperial Diadem of Austenasia.

The Imperial Diadem is made of a gold ribbon, fastened at the front by a jewel from a ring that belonged to the maternal ancestors of the former Emperor Terry I. In an attempt to make it look more similar to the diadems of the Byzantine Emperors, in November 2009 two gold chains were attached to each side of the diadem as pendilia, which hang over the shoulders when worn. On 24 July 2016, in recognition of his personal faith five years to the day after his reception into the Orthodox Church, Emperor Jonathan I attached a small gold cross to the front jewel.

The Imperial Diadem was used by the Founder to crown Terry I during his coronation. Esmond III however took the Diadem from the Founder's hands and crowned himself, following the example of the Byzantine Emperors rather than European kings.

The Imperial Sceptre is a piece of polished brass pipe, with a golden appearence. It is held by the Monarch during their coronation and other formal occasions.

The Imperial Robes are purple robes with a silver trim, and are worn by the Monarch during their coronation. The robes were part of a costume set of a local drama group, which donated them to Austenasia in May 2009.

The Imperial Chain is a gold-plated neck chain, inherited by the former Emperor Terry I from his late father. It is worn by the Monarch during their coronation. While Esmond III only wore it for his coronation, and Declan I never wore it, Terry I wore the chain on a day-to-day basis; Jonathan I also currently wears the chain frequently, making it the only piece of the Imperial Regalia to be used often outside of coronations.