Great Kingdom of Falalia ( Indonesian : Kerajaan Falalia Raya ) is a micronation that was established on September 15, 2017 by King Muhammad I and located in Bandung, West Java.

The name Falalia or in the Falali language itself is called Falalija consists of two components: Falalija etnonim and the abstract ending which means "owner", "land" (derived from the Arabic ending, Iyya which is similar to the Greek term "ia"). Falali himself is taken from Arabic, Al-Falah which means victory. The word was chosen by Prime Minister and King Falalia, Muhammad Iqbal Zhjah Pazhja because he expected that the country he formed was a land of victory. In other words, the Prime Minister expects that the Falalas are a victorious nation.

Falalia nation's effort on independence was started on 15 June 2017, when a large-scale war between Falalia and Chikale, a neighboring micronation led by Haikal Darunnajmi, was started. The conflict was caused by a dispute on maritime territory. On the first battle on that day, Falalia successfully defeat Chikale armies.

Chikale later orders deployment of 25 troops of their Republican Defense Force to Falalia capital at that time, Fatihstan in 8 July. The troops was personally commanded by Haikal and was ordered to defeat Falalia by conquering its capital. The second battle was occurred in 10 days, and Falalia was defeated with its capital successfully taken over by Chikale.

Leader of Falalia, Muhammad Iqbal Shah, was furious after the defeat, and decided to personally led 50 troops of the Liberation Army to retake Fatihstan. The battle was started in morning of 30 July, when Chikale army was on its weaker point. During the battle, Falalia faced an unexpectedly staunch resistance from Chikale, despite their smaller number of troops. After 8 days, Falalia successfully retake its capital and Haikal was taken hostage by Falalia. After its independence, Falalia recognises 30 July as their Day of Victory. 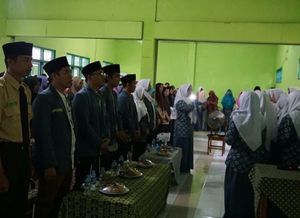 On 8 August, the Grand Preparatory Conference for Independence (Indonesian: Konferensi Persiapan Kemerdekaan Akbar) that has been assembled by Muhammad Iqbal convened for the first time in Rikhlaant City. It was convened after several citizens calls Iqbal to support the establishment of Falalia as an independent micronation, and urging the entire citizens to support independence.

The conference was attended by all Falalian citizens that engages in a very productive discussion. The conference discussed the national ideology, state flag and emblem, national anthem, government system and its constitution, the national capital and territory. After all of the discussion was accepted in consensus, the Conference declared Falalian independence on 15 September 2017. Muhammad Iqbal was coronated as Muhammad I in September 2017, galvanising Falalian monarchy.

Initially, the Great Kingdom of Falalia adopted a constitutional monarchy system of government. Where the Prime Minister holds the highest authority in government. He also has the authority to make a policy. But after the Falalia National Meeting which took place on 15 April - 1 May 2020. The system was changed to an absolute monarchy and the post of Prime Minister, abolished.

Because of the absolute monarchy system. His Majesty King Muhammad I holds the highest authority in both the government and the state. Then, to assist him in carrying out all the tasks mandated by the people. The king also formed new state institutions, such as the Monarchy Council, the Supreme Advisory Council and the People's Assembly. He also allowed several other members of the royal family, such as The Successor, Grand Mother to take care of the Kingdom's internal affairs

In a system of absolute monarchy government. Political phenomena often occur in the kingdom's internal environment. Where if the case occurs, it will greatly affect the decline in the performance of a King in carrying out all the duties set forth in the Constitution.So as to stabilize the internal political situation of the Kingdom. His Majesty King Muhammad I Shah created a new institution called the Monarchy Council. The chairman of Monarchy Council is The Great Mother and consists of all royal families.

His Majesty King Muhammad I Shah was aware that not always the decision he made had a positive impact on the entire Falalia community, both in terms of economy to politics. Then by mutual agreement, a new state institution called the Supreme Advisory Council was formed. The members themselves consist of 10 people, elected directly by the King with the main conditions, having an education degree of at least a Bachelor.

After joining the Kingdom of Sunda Raya. The Great Kingdom of Falalia should have 6 provinces today with an average distance of 10 to 70 km. But after the resignation of the Governor General of Nakma Province, namely H.E. Arman Because he wanted to take care of various documents to continue his studies to college. The provinces in Falalia become 5. Where 3 of them have been given special status.

Following the proclamation of independence on 15 September 2017, Falalia government immediately introduce its micronation to the world micronational community, and engaging in diplomacy with other micronations, including by setting a Facebook or Google Plus fanpage.

Falalia currenty is the member of the Association of Indonesian Micronations after being accepted in early 2018 as observer. Until first semester of 2018, Falalia has engaged in diplomatic relations with Amaranth, Liliput Kingdom, House of DeHererra, West Antartica, and Republic of Molossia, and more than 100 micronations.

A month after the proclamation of independence, the Falalia Kingdom economy has not gone perfectly as it is written in the State Economic Planning Book. This is because post-independence, Falalia is focused on establishing relationships with other micro-states and maintaining a political stability that is heating up rather than the country's economic development.

However, once everything is stable. Falalia began to focus on the country's economic development. Begin building all economic support infrastructure such as Stock Market, National Central Market. Also the Falali government scored its own currency known as Fatih which later became the currency of Falalia in the Constitution of the State of Falalia. Fatih Printing and Distribution is the responsibility of the National Bank of Falalia. The value of fatih against rupiah reaches 1 F = 2500 IDR. Meanwhile, against the dollar reached 1 US $ = 4.5 Fatih.

Falalia land claims is a mountainous region, with its lowest point is in the Fatistaan province with 891 metres above seal level, and the highest is in Nakma province, with 998 metres above sea level. The capital city, Rikhlaant is locaed 902 metres above sea level. Falalia also a tropcial micronation, with high rain level throughout the year. The highest average annual rainfall is in Nakma Province on 2882 mm, while the lowest average annual rainfall is in Rikhlaant Province on 2164mm.

Falalia is located in Bandung. Bandung is considered a major & significant cultural hub in Indonesia. Most people in the surrounding province of West Java are Sundanese. Sundanese language is often spoken as informal language for communication in streets, school, campus, work and markets, while Indonesian-Indonesia's national language and lingua franca among its many ethnic units-is used as the lingua franca, the official language and the language of government, businesses, and instruction at school.

Falalia is one of the most interesting places to visit by tourists. Especially those interested in learning about micronization. In addition to its educational tour, Falalia people's average hospitality - the average person makes this sundanese, anyone who ever travel in this country would be addicted and want to visit this country repeatedly.

There are some interesting and cheap natural attractions around the area of ​​Falalia. And in every province, there must be interesting places to visit. In Nakma province, tourists visiting this country can visit Tangkuban Parahu Mountain, The Lodge Maribaya, Floating Market, Princess Hill. Meanwhile, Rikhlaant province, visitors can visit the white crater, Situ Patenggang, Situ Cileunca, Ciwalini. In the province of Fatistaan, visitors can feel the spa and relaxation tours at a cheap price. As well as in Alfa Province, visitors can visit Pangandaran beach, Pelabuhan ratu beach, and other attractive beaches.

Falalia is located in western Java and the majority of west Java people are Sundanese.And already many known, Sundanese cuisine is delicious. Sundanese food is characterised by its freshness; the famous lalab eaten with sambal and also karedok demonstrate the Sundanese fondness for fresh raw vegetables. Unlike the rich and spicy taste, infused with coconut milk and curry of Minangkabau cuisine, the Sundanese cuisine displays the simple and clear taste; ranged from savoury salty, fresh sourness, mild sweetness, to hot and spicy.

Sambal terasi is the most important and the most common condiment in Sundanese cuisine, and eaten together with lalab or fried tofu and tempeh. Sayur Asem vegetable tamarind soup is probably the most popular vegetable soup dish in Sundanese cuisine. Another popular soup is Soto Bandung, a soup of beef and daikon radish, and mie kocok noodle soup with beef meat and kikil.

In addition to the food above, Falalia also has other specialties such as seblak, fried tofu baso (Batagor), cuanki, cendol, cireng, cimol, gehu, cilung. With a chewy texture of aci (meizena flour), plus chili sauce. It seems no one is not interested in eating this and want to eat this food over and over again