The Free Empire of Highland is an unrecognised sovereign state (often referred to as a micronation) founded on the 18th December 2016. It is bordered on all sides by the United Kingdom of Great Britain and Northern Ireland. The country was founded in order to give its citizens a bigger say in the shaping of government policy and to provide maximum liberty for them. Current Federal Consul and founder Mr H Whittingham has said he would like to create "a true classical liberal nation" and considers himself a libertarian.

The nation was founded on the 18th December 2016 after a declaration of secession was made by HRH Emporer Whittingham. A written constitution was decided upon and supported unanimously by the newly formed National Convention of Citizens on the 26th December 2016. With current Federal Consul Mr H Whittingham elected unanimously to the office; having served as emperor and later president during the uncodified constiution period.

In 2020 Highland became a 'sixth world' nation according to the Boodlesmythe-Tallini classification method due to an increase in the resident population and renewed diplomatic/economic activity.The Federal Consul issued an act of law acknowledging the state's development and announced a further planned increase in the number of Highlandian Sheilds in circulation.[1]


The governmental framework laid out by the constitution establishes a unitary republic which encorporates direct democracy. The head of state and government (executive) is the Federal Consul who chairs the National Convention of Citizens. Proposes legislation to be considered, has responsibility over foreign policy; and may veto a bill which he/she deems unconstitutional (though this may be overturned by a two thirds majority in the National Convention of Citizens).

The National Convention of Citizens act as the judicial (see law and order) and the legeslative branch. Any citizen may take his/her seat and propose legislation which will pass with a majority (unless it is a constitutional amendment, in which case it will only pass with a two thirds vote in favour, supermajority).

Whilst only 50% of the population make their positions known at the National Convention of Citizens most of these prefer a very small, very restricted government. This has been the position of the majority of the country's population since its founding. 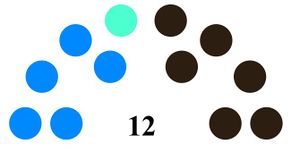 Political opinion of the Citizens. Blue = one believes in a small limited goivernment (i.e. Said person is considered libertarian.) Light green= a more centrist outlook believing that a certain (limited) wealth redistribution by the state is necessary. Black = unknown

Due to the Free Empire of Highland having consistently extremely low crime rates (0 recorded as of 2016) the maintenance of a police force is seen as unnecessary. Individuals suspecting another citizen of a crime may use citizen's arrest powers to arrest them (accept when they are voting). Trials are carried out by the entire populace at the National Convention of Citizens.

The Free Empire of Highland maintains a semi isolationist foreign policy, it does not enter any international organisation as all are deemed threats to national sovereignty.

The state does maintain bilateral relations with a small number of other nations. Those aspiring to establish such formal ties are kindly asked to fill out the form or alternatively contact the Federal Consul by other means listed on the National website:

The government of Highland currently unilaterally recognises as nations:

All members of the United Nations.

All members of the Grand Unified Micronational

Additionally any political entity which fulfils the Montevideo Convention on the rights and duties of states is classed by the government as a sovereign nation.

The Free Empire of Highland currently maintains no standing army as the current Federal Consul is committed to ensuring the country remains peaceful and strives for peace with all nations. However a national militia may be raised (lead by the Federal Consul) to resist invasion. In such a circumstance Citizens would arm themselves and as a result the government does not posses any weapons. Conscription has been forbidden since the adoption of the constitution in December 2016.

The government does not keep any records regarding the economy such as GDP, Gini, Employment figures e.t.c however it is estimated that the economy is heavily reliant on imports from the United Kingdom of Great Britain and Northern Island.

There is no regulation of business in the country. With the Federal Consul Mr H Whittingham believing that it is not the government's job to regulate the activities of private enterprise. As of 2017 the country has one of the lowest tax rates in the world, with no taxes raised from either businesses or individuals. Due to many citizens believing that voluntary contributions of money or labour are better way to fund protects than compelling tribute.

The currency of the nation is the Highlandian Shield. Which can be used to buy things within the nation. Though there are currently no banking services most citizens keep currency in safe deposit boxes. The currency is backed up with salt, pepper and soap to ensure its value. It has been pegged since its inception to the US Dollar to facilitate easy conversion.

Though no official records are available on the religious affiliation of the populous. Due to sampling done of Citizens at the National Convention of Citizens show that the vast majority are christians. Therefore it is unsurprising that the country maintains Christmas and Easter as public holidays.

After the creation of the National Park Corporation citizens can enjoy said national park and are able to play sport. Though the official sport is medieval combat it is rare for it to be played due to its violent nature. Apples and plums are now being harvested from the park reducing the nation's reliance on imports of food from the United Kingdom of Great Britain and Northern Island.

The national website and The Highland Media Corporation website are the only media outlets in the nation.

The Highland media corporation is the only media service currently operating in the country.It runs the official online and media portal where citizens living abroad and others can keep up to date with news and information about the Empire.

Most media consumed in the Free Empire of Highland is imported from the United Kingdom of Great Britain and Northern Island. With many including the Federal Consul turning to British radio to find out what is happening in their only neighbouring state.

None as of yet. The official national website is under construction.