The Federal Kingdom of Starasia, more commonly known as Starasia, was a micronation in Mississippi, United States.

Starasia was founded in 2021 by King Tucker I after seeing micronations like the Republic of Molossia and the British Arctic Territory run their operations, with the main inspiration being Molossia. The capital of the micronation is New Tuckland, while the biggest city is Liwitzia.

Starasia was governed as a federal parliamentary constitutional monarchy, under the headship of King Tucker I, with the prime minister being announced at a later date. The government held a conservative standpoint on most political arguments, while on some they tended to shift more to the center. King Tucker I had exchanged emails and embassy inquiries with Kevin Baugh, the president of Molossia, and Clay Moss, Head of the British Arctic Territory. Starasia had ambassadors to both micronations. While Starasia was not very active in the broader micronational movement, as quoted by Tucker I, they "hoped to become a major part of the micronational movement."

On 11 April 2021, Tucker I made the report that the micronation would be disbanding until further notice. They are currently disbanded to this day.[1]

Starasia was the first name to come to Tucker I's head when he was trying to think of a national name, and so he used that. There is no meaning behind the name.

Starasia was NOT in any way affiliated with the continent of Asia.

Starasia was founded on 16 March 2021 by Tucker I. He founded Starasia originally as a federal republic. The first Constitution was drafted on 18 March 2021 but was later scrapped. Starasia's flag was designed on 20 March 2021. The republic became a kingdom on 2 April 2021.

Starasia was run by a federal parliamentary constitutional monarchy. The king of Starasia was Tucker I, also known as Tucker the Great, who ascended the throne on April 2, 2021. The prime ministry was vacant because there was no person to hold the office. 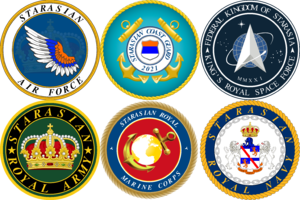 The six seals of the Starasian Armed Forces

The Starasian Coast Guard had a fleet of 1 boat, owned by Tucker I's grandpa. The boat is currently located in Louisiana.

The Starasian Space Force had a fleet of 1 Lego rocket. The Starasian spaceship, nicknamed the "SSF Starbourne", has made 1 expedition to the Moon.

The Starasian Army had 1 recruit, Lee the Great. It contains a fleet of 2 weapons; a pistol and a revolver.

The Starasian Marine Corps consisted of 1 boat, located in the U.S. state of Louisiana.

The Starasian Navy had 1 recruit, Tucker I. Tucker served in the Navy since its establishment on April 2, 2021. The fleet consisted of 1 boat, the SRN Whistleblower.

The Federal Kingdom of Starasia worked out a sum of foreign relations with other micronations.

The two kingdoms have established relationships with eachother.

The Republic of Meytallia was the first ever nation that King Tucker I reached out to personally. Prime Minister Sanders, the prime minister of the nation, stated in a conversation, "I am incredibly humbled by Starasia's offer of diplomacy."

Starasia was located in Madison, Mississippi. Madison is located about 338 feet above sea level. There are no major mountain trails or peaks near Madison. Due to Starasia being governed out of the Jackson metropolitan area, it is fairly warm throughout the year. In winter, the climate can get colder. In 2020, Madison's low was about 27 degrees.

Starasia had state run TV. The Filmmakers Association of Starasia produced all state propaganda, while the Starasian News Network focused on state news. The Filmmakers Association of Starasia has existed since 18 March 2021, when they produced their first film, the President's Inaugural Speech. The Starasian News Network has existed since 8 April 2021.