The Confederate Militia is the term given to the first centralist controlled military units in the Valnorgrad Confederacy. Also name still given to civilian duty personnel who are registered to be called up in a time of need, this includes all citizens not in active duty military service.

In the beginning of the nation it was clear a centralist order should be established to ensure the safety and security of the citizens. It was decided to take what militias that were already active and combine them into a unified force under control and funded by the central government. Thus the Confederate Militia was born. This organization was a far-cry from the professional armies that Valnor fields today. Many times in the old days orders were taken as suggestion and a lot of the times not followed. The term coined "cowboy diplomacy" fit this rag-tag bunch of defenders to a tee. They served as an all purpose force with the responsibility of guarding the borders and acting as a police force in internal disputes. 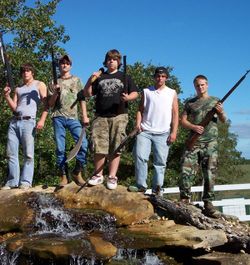 Some of the first Milita members

As the nation grew older it became more "civilized" with the old wild west way of doing things transitioning into law and order. Eventually the Confederacy's central government spread its influence and control to every corner of the nation. With the sufficient financial backing, and manpower came the ability to supply and field a "standing" army. This marks the beginning of the end for the militias serving as the main combat force. Until the nation transitioned into the Peoples Republic of Valnorgrad, militias still served as a support role to the main army. Up until that time the militias still had a large amount of active duty troops being deployed into the field. They were also still serving as the authority in internal conflicts (police) to relieve stress off the newly founded Valnorgrad army. But after the nation fully transitioned into the Peoples Republic, it was decided to disband the militias as active duty. The politicians saw the militias as a liability and a threat to their control (they could oppose the Legions), along with being a threat the politicians decided it would be more cost effective to have the now numerous standing army to assume control of policing duties and cut funding all together for the militias.

Now under SkyMarshal J. Hargis has issued a new order to revive the militia to include all citizens not currently on active duty. This effort is to ensure that if the Confederate Legions and Imperial Guard falter, there will be a support system to lend a hand when and where is needed. Under the Articles of Allegiance every citizen under the Valnorgrad flag is allowed and required to maintain a working firearm in case service is required. This serves as a dual purpose 1: Every citizen when called up is combat ready and does not need to be equipped, also saving government money. 2: In the case of invasion, this creates a ready made guerrilla forces to be behind enemy lines to hamper supply lines or to face off directly against invaders. Another point to this besides military uses is to help every family in home defense against any perpetrators.

The first weapons our nation employed were civilian owned weapons. These guns range widely in size and caliber, this made it difficult to provide ammunition in steady supply. After the militias became government funded and controlled it was clear a standard rifle needed to be placed for logistical purposes. After the centralization of the militias and the establishment of the Confederate Legions, the weapons from both organizations began to follow the same path.

(note: all weapons are legally owned)