From MicroWiki, the free micronational encyclopædia
(Redirected from Cadmea)
Jump to navigation Jump to search

The Province of Cadmea is the oldest and smallest province of the Micronational Empire of Thebes. It is located in Lake Gaston.

Cadmea was first noted several times by Charles and James Miller before Thebes had been created. When Thebes was founded by Eithan Ackerman and Charles Miller, Miller suggested that they should annex the small island as their first province. The same day, the capital of Cadmea and Thebes as a whole, New Thebes, was founded. Less than a month later, on July 13, after the resolution of the Garf War, Cadmea was landed on for the first time. Eithan I was the first to step onto the island, followed by vizier Charles Miller, Consul of Citizenship James Miller, Consul of Technology Cayden Ludlow, Consul of Education and Knowledge Alex Savage, and a Citizen, Kody Ludlow. While the landing party was on the larger island, they discovered there was a second, smaller island. Kody Ludlow swam over to it and landed on it, so it was named Ludlow Island. Ludlow Island was annexed and added to the province of Cadmea. On May 5, 2020, Cadmea was landed on for a second time, during the West Gaston Expedition of 2020.

Cadmea, unusual among the provinces, is governed by the king because the capital of Thebes is located in Cadmea. This also makes Cadmea the only province with a governor not elected by the people. 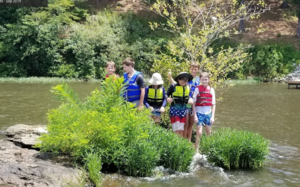 The first landing on Cadmea.

Cadmea consists of two islands, Cadmea Island and Ludlow Island. Cadmea is about 50 feet from the coast of the United States, and is far from any other provinces, the closest being Garf. Cadmea is rocky and infertile. Cadmea Island does not flood much, while Ludlow Island is prone to flooding. Canadian Geese and Pink Bellied Turtles are found in Cadmea with great abundance. Cadmea has a single small tree in the center of the island.

During Charles I's and James I's times as governors, they made several things the provincial items, which are listed below.