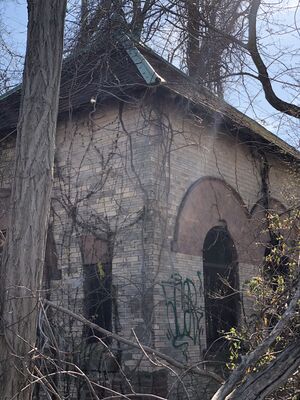 Outside of the Death Pit

The Death Pit is an abandoned Building located in Reichskommissariat Bellmore in Ausveria, it is named such for a massive water filled pit inside it that formed from the floor collapsing into the basement.

The Death Pit was originally a water pumping station built by the New York State government sometime in the early to mid 20th century, it was most likely abandoned sometime in the 1980s and since then has been a gathering spot for local teenagers.

The Death pit was claimed by Ausveria on March 9, 2021 as part of Reichskommissariat Bellmore, it is located along the former Ausverian border with the now defunct nation Gayveria.

During the Ausverian Civil war the Death Pit was a frequent target for incursions by APDRFESLA. It continues to be a target by APDRFESLA in the ongoing postwar APDRFESLA Insurgency