From MicroWiki, the free micronational encyclopædia
(Redirected from Union of American Soviet Socialist Republics)
Jump to navigation Jump to search

The Empire of Austranthium, is a micronation located within the U.S state of Illinois. The Empire is a constitutional monarchy, but at times the monarchy or government represses anyone who critizes the government or its leaders. Some consider it an absolute monarchy or an autocracy. The Empire was dissolved on April 9, 2022 due to it serving no purpose.

Comes from the Kingdom of Austranthium. A more smaller state than the Empire.

The government of the UASSR was established under a Federal Marxist-Leninist one-party Socialist Republic with proclaiming himself General Secretary. The General Secretary Charles Chalybe resigned his post and said that "the UASSR will be incorporated into the Kingdom of Austranthium."

The government type is a Fedearl constitutional monarchy with Charles I being Emperor.

We do not have any relations with any other micronations.

The Armed Forces of Austranthium are the main military arm of the Empire. 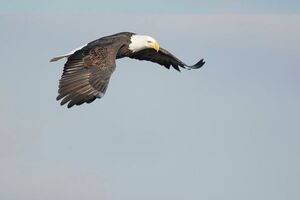 Eagles are common in the UASSR.

The weather is usually really cold and snowy during the Winter Months, However, in the summertime, it is very warm outside. The terrain is mostly plains and hills.

Our industries are media, medical equipment supplies, food processing, and Vehicle Manufacturing. We have no trading imports or exports at the moment.

Our immigration authorities will allow anyone who takes the citizenship application form to become a citizen. Education is reformed to give our children the knowledge they actually need to know. The American Leninist Institution is a non-profit organization designed to help college students learn about how great the UASSR is. The Ministry of Education takes education very seriously and does a lot of reforms to the school system. The languages are mainly English and German, there is a lot of ethnic people, so the government enacted a decree that anyone could speak their native language. We do not have anyone that is skilled in the arts. The press is controlled by the state and only reports the real news. Television will have a lot of different TV shows that will air.