The Republic of Conpan, commonly referred to as Republica de Conpan, or The Conpani Republic, or Conpan for short is a satirical micronation that is a parody of tinpot dictatorships that were prevalent in Africa and Latin America, ironically espousing ideals of freedom and equality.

Conpan itself is under the benevolent thumb of Chairman Corvin who decides to do whatever with the nation based on what he feels like doing on that particular day. There is no judicial system, and most laws are made on a whim, and are arbitrarily enforced by the secret police, who can send offenders to Sinpan.

Conpan is a rather isolationistic nations with few international relations, and has recently shown a willingness to expand them.

Conpan itself comes from the Spanish words Con (meaning "with") and Pan (meaning "bread"). It is a name made to give the ideas of prosperity with bread being plentiful, as contrasted with Sinpan with Sin simply being the Spanish word for "without".

Before the constitution of Conpan was written, Conpan itself was more of a mess of Totalitarian imposition on the masses. Laws were being created at random at the behest of the God-Emperor and his Secret Police. It was during this period that Sinpan was created as a place to send political prisoners and people who displeased Corvin. Nothing much of note happened there and we are not allowed to write it if anything did happen.

Corvin, realizing the need for some order brought together a constitutional convention to draft a constitution. Nothing much came of this and Corvin had to write the constitution by himself.

The first President Stefan of Snagov made waves immediately after taking office by doing not really much in particular. This Era was known for its inactivity which was not helped out by the President of Conpan not doing much to help this out. This Era also had the occasional instances of political oppression by the state. Towards the end of Stefan's Administration Corvin began filling more seats that were created by the constitution for some checks and balances in the government.

The first President was notable for not doing much of note, however the second President May Junkin was known for doing so much in such a short period of time which possibly violated the constitution in some instances. Immediately after taking office President Junkin began by remarking that the Revolution in Conpan has stalled, and called for all Counter-Revolutionaries, Fascists, and Reactionaries be deemed "Unthoughts", a label which immediately became controversial. The President declared various people of being unthoughts, even some socialists, as well as the Justice of the High Court and the Investigative General. Corvin retorted by telling the Justice and Investigative General to Pardon themselves, which they immediately did.

After this the Investigative General was wanting to open an investigation on President May in which they asked her to reveal the requisites by which she designated who was and was not an Unthought. May provided this information, which then led to the Investigative General withdrawing part of the investigation. After this there was an investigation into May was approved by the High Court and launched. The results were published, however the High Court did not end up taking action after the release of said results.

The High Court is elected by both Chambers and is tasked with ensuring the Constitution is being followed.

The Executive Branch comprises of Confederal Officials tasked with carrying out the decisions of the High Court as well as law enforcement within the Republic.

Many laws can still be created by the Chairman with some instances of the Chairman consulting in the secret room with high officials on the what and how of said laws. The enforcement of the law is undertaken by the aforementioned secret police, who will on occasion falsely send a few citizens to the region of Sinpan

(Note: Some of the parties shown may not have their full numbers represented due to their members being in Sinpan, therefore forfeiting their Civil Rights)

Conpan officially recognizes and accepts the status of Refugees from the horrific nations of the United Kingdom and the United States. (Note this does not guarantee housing, it only guarantees that Conpan expands to your current dwelling)

Conpan currently has a treaty of relations with: 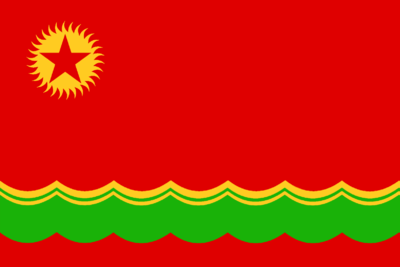 The official flag of the region infamously known as Sinpan

Sinpan is a region in which political prisoners are sent to serve their sentence for an undetermined, usually random amount of time. During which time they are unable to access the rest of Conpan, and are under the watchful eye of the secret police. Sinpan used to have the false guise of it being a vacation for political dissidents to be re-educated, but Corvin abandoned this idea because it was "too much work".

The Lottery was an event in which a lucky Conpani Civilian was chosen at random to take a trip to Sinpan. They were usually let out after they asked kindly to be let out and saying please.

One day the President of Boyland (now referred to as Bayland) decided to hop into Conpan and attempted to declare war on the fair nation. This failed spectactularly as he was then laughed at, kicked out, brought back in, only to be sent to Sinpan as a political prisoner to be laughed at again. The President of Boyland was in the third circle up until he started annoying the administration to the point that he had to be deported.

CPB is a government owned enterprise that often airs official statements by the Chairman, President, Investigative General, and many other Government Officials. CPB also will have more of a bias in favor of the government by the nature of it being a government backed source. Taking this into account, the Conpani Government now allows civilians to have their own news/media start-ups, even if they air dissident messaging. 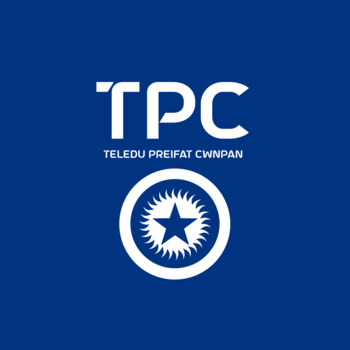 Originally called the Conpani Star, Teledu Preifat is first private Conpani news source, which translates to "Private Television" from Welsh. Originally it was to be a newspaper, however it now consists of going on the air, with articles on the way

Conpan actually wasn't the original name; the original idea was to call it Sinpan, but this was scrapped for being too on the nose. 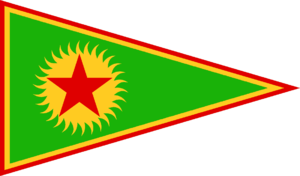 Conpan actually has two official flags, one being a rectangular flag and the other being a pennant variant.

Conpan doesn't have a coat of arms; instead, a roundel was made, since Corvin didn't really feel like opening Paint that day.

Conpan is a LGBT+ supremacist state, meaning if you're straight - don't.

A member of the Secret Police once tried to make white people illegal; the law was briefly enacted, only to have it be enforced on them due to the fact that they were white. Aside from that one specific instance, the law no longer applies.