The Royal Galacian Navy (RGN), codename "Green Falcon" is the naval defense program, under the umbrella department of the Royal Galacian Armed Forces initiated in November 2011 to protect the bounderies of Galacia. The Commander-in-Chief of operations is His Majesty, King Anonymous. The Navy currently owns two kayaks. 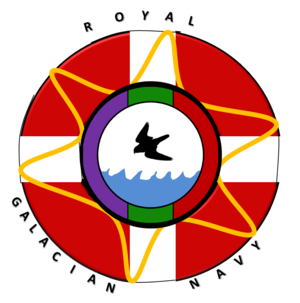 The Navy is in a temporary stand-by, due to shortages of supplies and time. However this suspension will be halted and the Navy will progress to preform its necessary duties.

All planned water-craft will be entirely waterproof (done by covering with aluminum/tin foil, or seran wrap)

The King hopes to minimize Galacian casaulties by making everything remote-controlled. All boats and ships will either be rafts or buoyant, enclosed structures.