The Principality of Novapara is a micronation located in the Pacific Northwest. The island nation was founded on January 22, 2016, as a model-state project on Whidbey Island and is still in an active status. The American state, Washington, borders it on three sides while the Puget Sound (Salish Sea) on one. Novapara has an area of 0.4 sq miles (1.036 km) and a terrestrial population of 5.

Novapara is a principality, governed under a form of a constitutional monarchy, with Prince Xavier as head of state. The monarch still wields immense political power, especially under the State of Emergency. The official language is English although French is often used, prominently in government use. The state's independence has not yet been recognized or declared. Currently, the nation functions under the dominance of the USA, thus the USA is responsible for the country's protection. Novapara enjoys the use of American roads, power and many other utilities and pays an annual contribution in return.

Economic development in the nation has been slow and small. Due to little usable land, lack of resources and workforce there isn't much to develop. Most recent efforts to spur a better local economy has been in the development of local agriculture. An international private sector has been proposed as well, still in beta, however.

The nation was founded as a model-state on January 22, 2016. While practising a solitude-based foreign policy it's still a relatively active member in the micronation forum community. Novapara has acted as more neutral regarding most recent cases of micronation wars and debates. Novapara is most known for its artistic culture, as well as its more recent organic agriculture push & promotion.

Novapara's name was greatly inspired early American colonization (e.g. New England, Acadia and Nova Scotia). The prefix, para, was taken from words like paramount or paradox. In Novapara's use, it translates to New Beyond. Original translations although of the name were New Informal, regarding the informal nature of micronation-states.

The nation does not have a standing military or defensive branch as the US is declared responsible for the nation's protection. 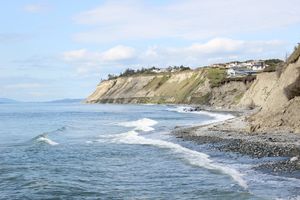 Novapara (area 0.4 sqr miles) is a micronation located on Whidbey Island in the Pacific Northwest. It is bordered by the American state, Washington and the Puget Sound (Salish Sea). Canada's British Columbia is also located just over the sound. The nation's highest point is 216 feet above sea level.

The majority of Novapara is loosely suburbanized, ranging downhills towards the coast. Most of the land claimed in Baku is occupied by a non-resident population so natural resources are very limited.

Novapara has a warm-summer Mediterranean climate (Köppen climate classification: Csb). Located in the Olympic Rain Shadow, Novapara gets significantly less rain than much of the Pacific Northwest region, similar gloomier weather though.

Novapara has had poor economic development since its founding. Current efforts to induce growth include organic agriculture, still in development. Most residents travel to and work off-island in Washington state. Currently, the government does not impose any tax.

The official accepted currencies in the nation are Novacoin (NC), USD ($) and Micronational Dollar (M$).

Novaparisian culture is largely based on art (theatrical, musical, artistic, etc.). Much of the population have very strong convictions regarding Western medicine, diet, pop culture, religion, and education. However officially the nation maintains a neutral stance on most subjects.

Novapara officially is not religiously affiliated by popular opinion. (Values from various religions like Christianity & Buddhism are admired and some even practised/accepted however the act of following & identifying as one isn't popular.)

Food in Novapara has much inspiration from Asian, Italian and Tex-Mex dishes. Fresh and organic foods are strongly preferred throughout the nation. Notably, 43% of the population is pescatarian & 14% does not eat grains, dairy or sugar.

Novapara currently exercises a solitude-based foreign relations policy. Only considering light, non-obligating relations. Although Novapara has contact and interaction with many micronations it has only officially recognized and been recognized by one micronation, the Duchy of Hodiny in a Non-Aggression Pact between the two.

The only other foreign/international organizations Novapara has entered or aligned itself with is the Micronational Dollar Institute and the Naturel Organic Organization (private, non-government affiliated organization).