From MicroWiki, the micronational encyclopædia
(Redirected from Myrotanian)
Jump to navigation Jump to search

The Myrotanian Language, or simply Myrotanian, is a Germanic-based constructed language (conlang) created by the Emperor Thomas I near the end of June 2014 for official and academic use within the Empire of Myrotania and the language was originally intended to be based upon the Dutch language.

In Myrotanian, words are not capitalised as certain letters have different pronunciations when capitalised (e.g. 'h' may be silent, whereas 'H' is always pronounced and is similar to ich in German).

There are, overall, 483 root words in the Myrotanian language. The etymological breakdown goes as follows:

Adjectives precede the noun in Myrotanian. Adjectives in the predicative aren't altered, however, when directly before a noun they are affected in the following way:

The present active indicative conjugation of verbs in Myrotanian is the stem, with the following endings: 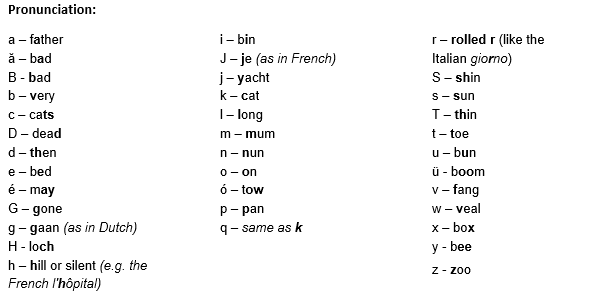 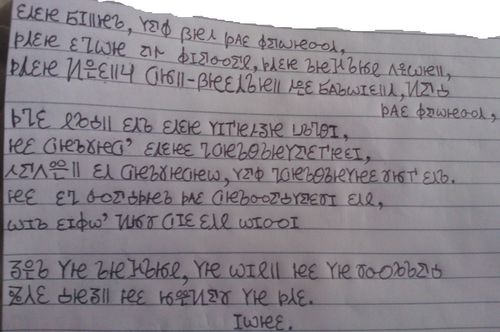 Our Father, who are in Heaven,
Your name is holy, Your kingdom come.
Your wish done-become on Earth, like in Heaven.
Give today to us our daily bread,
And forgive our trespasses,
As we forgive, who trespass against us.
And don't lead into temptation us,
But take away from us evil.

For the kingdom, the power and the glory,
Are now and eternally yours.
Amen

Article 1 of the UDHR

All human beings are born free and equal in dignity and rights. They are endowed with
reason and conscience and should act towards one another in a spirit of brotherhood.

All humans are born in dignity and rights free and equal. They endowed-become with
cause and conscience and in a sprit of brotherhood should towards each other act.

is transliterated directly from the Myrotanian Alphabet. Including accents, there are 36 Latin letters used (with an optional 37th, the acute accent over the 'i', to aid pronunciation). This way of writing Myrotanian is the most common, as there is not yet a way of typing the Myrotanian alphabet straight onto a computer.

This is the Myrotanian alphabet in the order: