The Kingdom of Albion was originally founded on 15 January 2010 as "The Kingdom of Dadingisila". On 4 July 2010, after about 6 months after the date of foundation king Jan I of Dadingisila wanted to reform his nation. After some problems in the past it was time to reform the nation to start with a clean sheet. Albion continued on the foundation of Dadingisila, with the values and norms that were present. On 24 October 2010 Albion joined the Flandrensisian Commonwealth, but confronted with a lack of activity the micronation was disbanded on 7 Janury 2012.

Albion claims a group of Islands between West Antarctica and the Azusan Commonwealth. The closest neighbouring countries are Landashir, which have claimed 4 Islands next to Albion territory. 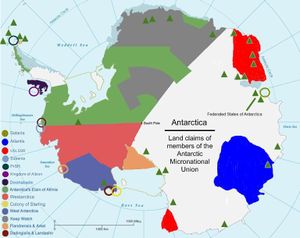 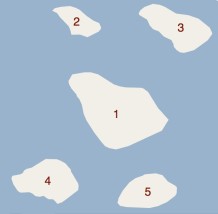 Our group of Islands exists of 5 islands:

The Islands form the shape of a cross that is shown in the flag. That's something coincidental. Every Island forms a shire. Every shire exists out a few small cities. There is no limit to the number of cities in one shire. In that case, we secure the expansion of our nation. For now, we only use Vollmer Island. On this Island, there are 6 cities and also the Royal City, called Center Town. 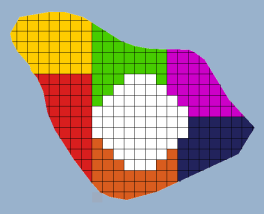 The Kingdom of Albion is an Constitutional Monarchy. King William I is the Head of State and Head of Government. The Royal Government of the Kingdom of Albion has three governmental houses; an elected Upper House, an appointed Lower House and an open Voting House who are a collective of representatives from all over the kingdom.

The Upper House is under the authority of the King. The Royal Cabinet exists from the members of the Upper House and is appointed to positions by the King. A Grand Election is scheduled to take place every 3 months by the monarch and lasts over 3 days. Albion hasn't got political parties but families. Every family chooses its Family head. Most likely this is going to be the person that has the most territorial, social or money-based power in his/her family. This person becomes a member of the Upper House. The next Grand Election is expected to be called on 15 September 2010.

The Voting House is Albion's primary governmental institution. All the citizens can propose a law or lay down a proposal regarding the national interest. After 2/3 of the voters approve the proposal, it's getting transferred to the Lower House where the Noble citizens and the mayors can out their vote. So the citizens always get the first opportunity to approve a change in the kingdom.

In Albion political parties are called families. Every citizen chooses one family. Once chosen, you have to stay with that family. If a citizen wishes to leave a family for some reason, he or she has to ask the permission of the King. If granted, the citizen loses his/her political voting right for 3 months. Every family has its own political vision.

Due to the reformation, the families are dismissed. The first 3 citizens that want to raise a family can do this for free. From then on to raising a family will cost 500000 Gold. This doesn't have to be paid for by one person. Several persons can put the amount of Gold together to form their own family.

At the top of the family stands the family head. This person is elected by the citizens of that family. The election finds a place every 3 months. The next election is on 15 September 2010. A Family Head can be re-elected without a limit. The family head has to represent the interests of his family in the Upper House. This person also gets a function assigned by the King. (for example minister of foreign affairs.) If a family head neglect his function he can be removed from his function by the Upper House and the king. If a family head doesn't want to be elected he can redraw himself out of the elections.