The Espium Republic, more commonly known as Espium, is a micronation between the North Atlantic Ocean and the North Sea.

The country was founded on 30 september 2020 by the president, and he has been trying to build up and make the country grow since. Because the country is really young, they don't have a lot of foreign relations, but this will change soon.

The Espium Republic was founded on 30 september 2020 by Julian Böhler. He was already extremely interested in politics, but he had no power. He wanted to make his people happy, so he successfully changed the island into a sovereign state. On the same day a parliament got elected to help the president run the country.

The president Julian Böhler has all the power of the country. That means that he can make every single decision completely on his own without needing any permission from anyone. Most people would think such a dictatorial state is scary, but this president really takes care of his people. The president is also the head of state. 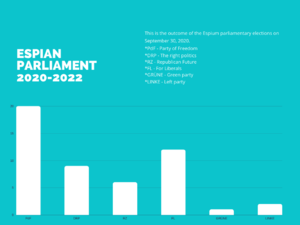 The outcome of the parliamentary elections in 2020. The biggest party is the Partei der Freiheit, Party of Freedom or PdF with 20 of the 50 seats.

There is also a constitutional law. All the law enforcements have to obey this law and even the president doesn't have the ability to change this law without a majority in the parliament. This the fundement of the country, created by the people themselves.

The Espium Republic doesn't have any contact to foreign states yet. The country wants to make this better as soon as possible. This will be available later. 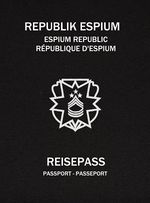 The Reisepass (German: Passport) of the Espium Republic. 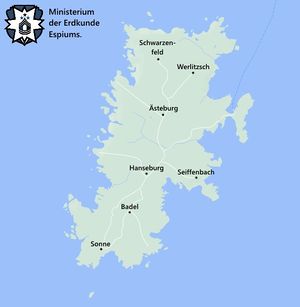 The map of Espium Republic.

There are 7 major cities in Espium.