The Empire of Laguna is an Empire located 30 miles away from Yu-Xia and located in San Diego, California and was founded under the rule of King Ezri I.

The Empire was originally named in 2016-2017 called the Shedletsky Union, due to the sheer impact that Ezri had on Roblox on 2016-18 and 2019–Present, including the face as well a meme that was coined in the late 2000s/early 2010s, the flag was inspired by the so-called United federation of Awesomeness.

The nation was going to appear by 2017/2018 due to the sheer hatred that he has with the Former President of the United States Donald J. Trump. But later he mostly forgot the plans during his phase as a pre-teen.

Before the Empire started off in 2020, it was first originally claimed by San Diego back in 1850 when the new State of California was established, when the county of San Diego claimed the future counties that eventually became Inyo, Imperial, San Bernardino, Riverside counties.

Here is the map down below the left side

The Thought of an Empire

In Mid-August 2020, Ezri joined a discord server called Microwiki@Discord, after seeing numerous videos about micronationalism, he started his own Micronation called the Kingdom of San Diego, which almost a month later was changed to the Empire of Laguna.

The reason he made this micronation was in preparation for the oncoming 2020 US Election in November, in which his mind, there was a possibility of a Second Civil War

In September 2020, a member of Microwiki@Discord messaged Ezri on a Direct Message in the VoIP, Instant Messaging platform, Discord, the man, which was Casper von Navaria helped him on the flag of the Empire after Ezri was requesting help on the servers general chat.

The Beginnings of the Empire

The period of inactivity started when the first Kapreburg civil war started and his summer trip to Minnesota, when he returned from his trip, the monarch himself was starting to lose interest in micronationalism and his Discord server was inactive for the first time in Lagunian history. The reason to this is him moving in to different communities inside Roblox, and possibly Minecraft as well.

Possible re-entry from micronationalism, according to the bottom text of the message.

Due to the last part of that Image, this also meant that Laguna would re-enter the Micronational world, as the Monarch of Laguna would make a statement to announce that Laguna is back after all.

A statement was made on the 28th of December, 2021 to announce that plans of the government were made for the new year, and a return to the micronational world, according to these plans 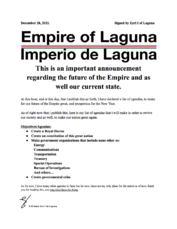 Government Announcement made on the 28th of December

Laguna is situated in San Diego, California, USA, which includes its beaches, monuments and other places in the city.

The country is run up by 10 districts and 8 territories, and one capital district, which is DF or short for Distrito Federal. 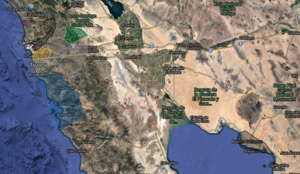 This is the map of its land claims and territories in the nation.

The country shares up nations with Yu-Xia, but there are other nations which consisted of former micronational countries in the city.

The currency that the Lagunians have in the country, is called the Lagunian Peso, something similar to pesos all around the latin american countries and spanish speaking countrys such as Mexico and the Philippines which use the same name.