Dooneen Cove Island is an island which was formerly under the jurisdiction of the Confederation of Leylandiistan and Gurvata for much of that nation's existence. It is located on the coast north-west of Allihies, Co. Cork, Ireland. It is an uninhabited territory.

The townland of Dooneen on the north coast of the Beara Peninsula is isolated and and surrounded on one side by the Caha Mountains and on the other by the Atlantic Ocean. The population density is very low and the land unsuitable for most types of farming. Like most rural Irish areas, the Great Famine of the 1840's caused most of the population to emigrate elsewhere. At the side of Dooneen Cove is a small building known as the Old Forge, a building which may in the past have offered blacksmith services to the local area.

Dooneen Cove Island is not listed on any historical records or outlined on any maps because it is considered too small and too close to the mainland to be considered an offshore islet. It was never inhabited at any stage because the land is too small and exposed to build any sort of dwelling. The name Dooneen Cove Island was given to it first by the Confederation of Leylandiistan & Gurvata before the annexation when it was discovered the island had no official name. It was given this name because it is the only inshore islet in Dooneen Cove. The word Dooneen is an anglicisation of the Irish term "Dúinín", meaning "little fort". This name in itself was considered appropriate for the island because it is a lone outpost of the Confederation, surrounded by mountains and the Atlantic Ocean.

The Declaration of Annexation, before (left) and after (right) being covered by rocks.

The Co-President representing Leylandiistan in the diarchical executive, Fionnbarra Ó Cathail, was travelling north from Allihies to Reenfrisk on 7 September 2014 when the road brought him past Dooneen Cove. A quick inspection of the strand led him to the island connected to it by a concrete walkway. With flag in hand Ó Cathail composed the Declaration of Annexation, which declared that the island was now under the jurisdiction of the Confederation of Leylandiistan & Gurvata. The Declaration was put into a plastic bottle, hidden in a depression in the centre of the island and covered with flat rocks to prevent it washing away or being weathered. The flag was raised on the island by hanging it from a fishing rope suspended from the island's steep rocky shore. Dooneen Cove Island's annexation was officially acknowledged and legally authorised by the Annexation of Dooneen Cove Island Act, passed a fortnight later as the first item of legislation in the Confederation's history.

On 23 September 2015, a return visit to the island was made by Ó Cathail. A border sign was erected[1] at the point where the causeway meets the island. A bridge, consisting of a pallet with rocks underneath to support it, was also erected over a long narrow depression in the middle of the island. The following day, when it was discovered the Declaration of Annexation had been taken from the island, a copy of the Annexation of Dooneen Cove Island Act was placed in a bottle and hidden in a the rocks on the north coast of the island.

The island is located in a small rocky cove on the north coast of the Beara Peninsula, County Cork, Ireland. The nearest settlement is the village of Allihies. It is about one metre offshore, and is at low spring tides connected to the mainland. An L-shaped concrete causeway which is about 5 metres long and one metre wide connects the island to the mainland, though it is presumed this causeway was originally built as a dock for small vessels, or to stop the sea from washing the natural stone cover of Dooneen Cove strand away. 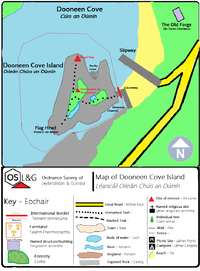 The areas above may be found on this map published by the Ordnance Survey of Leylandiistan & Gurvata. The map in question was the first edition and is not set to any particular scale.