The Commonwealth of Dracul has a diverse pool of citizens consisting of all walks of life. The majority of citizens are un-married and the nation is predominantly Male. Regardless, many Women are members of Dracul and contribute meaningfully in the day-to-day running of the nation; such as in South Dracul where both the Governor and Lieutenant Governor are Women. Additionally, the country has one citizen by birth who was born to a Draculian mother. 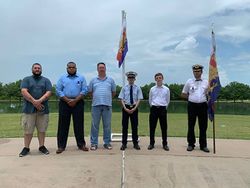 The Dracul Census Bureau established the current citizenship count of Dracul at 151 as of July 22, 2020. A census survey is normally sent to all Dracul Citizens about twice a year. Typically, Draculians do not reside within Dracul, but around the area, in various neighborhoods.

Presently, the most preferred and common language in Dracul is American English. Because of the growing number of individuals from India, there has been a slight increase in Hindi, however it still remains lower than English speakers.

As of early 2020, statistics showed that 55% of Draculians identified as Christian, followed by Atheism. Other religions, including Buddhism and Judaism remained at less than 1% of the population.

Approximately 70% of Draculians are single, with about 25% being married and 5% being widowed. Most of the single citizens are in some type of relation with another, but are not considered legally married.

Dracul had a life expectancy of 98% in 2018, making it a much higher percentage than neighboring United States. Most of this is attributed to exercising, better eating habits, and education in health. Although Dracul has no actual doctors or hospitals, there is a nearby hospital that many Draculians go to for emergency health care.

The Census Bureau released in 2019 that approximately 99% of Draculians graduated from high school, with about 80% of them graduating from an accredited University. Only about 1% of Draculians are considered drop outs or no education received.